I'll be brief. In cinemas this week: 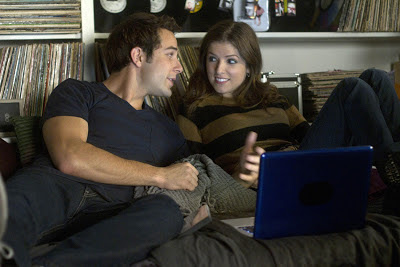 Pitch Perfect: Beca (Anna Kendrick) is that girl who'd rather listen to what's coming out of her headphones than what's coming out of you. Arriving at her new college, she finds herself not right for any clique but somehow is muscled into one that she never would have picked on her own: alongside mean girls, sweet girls and weird girls whose only thing in common is how good they sound when they sing together, in the new out-loud comedy Pitch Perfect. When Beca takes this acoustic singing group out of their world of traditional arrangements and perfect harmonies into all-new mash-ups, they fight to climb their way to the top of the cutthroat world of college a cappella.

The Man With the Iron Fists: Making his debut as a big-screen director and leading man, RZA-alongside a stellar international cast led by Russell Crowe and Lucy Liu-tells the epic story of warriors, assassins and a lone outsider hero in nineteenth-century China who must unite to destroy the clan traitor who would destroy them all. Since his arrival in China's Jungle Village, the town's blacksmith (RZA) has been forced by radical tribal factions to create elaborate tools of destruction. When the clans' brewing war boils over, the stranger channels an ancient energy to transform himself into a human weapon. As he fights alongside iconic heroes and against soulless villains, one man must harness this power to become savior of his adopted people.

Trouble With the Curve: Gus Lobel (Clint Eastwood) has been one of the best scouts in baseball for decades, but, despite his efforts to hide it, age is starting to catch up with him. Nevertheless, Gus-who can tell a pitch just by the crack of the bat-refuses to be benched for what may be the final innings of his career. He may not have a choice. The front office of the Atlanta Braves is starting to question his judgment, especially with the country's hottest batting phenom on deck for the draft. The one person who might be able to help is also the one person Gus would never ask: his daughter, Mickey (Amy Adams), an associate at a high-powered Atlanta law firm whose drive and ambition has put her on the fast track to becoming partner. Against her better judgment, and over Gus's objections, Mickey joins him on his latest scouting trip to North Carolina, jeopardizing her own career to save his.

Here Comes The Boom: In the comedy Here Comes the Boom, former collegiate wrestler Scott Voss (Kevin James) is a 42-year-old apathetic biology teacher in a failing high school. When cutbacks threaten to cancel the music program and lay off its teacher (Henry Winkler,) Scott begins to raise money by moonlighting as a mixed martial arts fighter. Everyone thinks Scott is crazy - most of all the school nurse, Bella (Salma Hayek) - but in his quest, Scott gains something he never expected as he becomes a sensation that rallies the entire school.


Weekly Recommendation: several of the writers at Graffiti With Punctuation have seen both 'Trouble With the Curve' and 'Man With the Iron Fists' and were less than impressed. 'Here Comes The Boom' sounds exactly like the plot of Joel Edgerton's character in 'Warrior'. I don't think so. The only film I have seen from here is 'Pitch Perfect'. It is the best reviewed film this week and I enjoyed it.
Posted by Andy Buckle at 10:48 AM