Imagine if there was an intricate world inside of the arcade games you loved to play when you were a kid? What if those little 2D characters had a life of their own? Wreck-It Ralph (voiced by John C. Reilly), the antagonist of Fix-It Felix, Jr, is tired of being shunned by the other characters in his game (whereas the hero, voiced by Jack McBrayer, is celebrated and rewarded). Despite his day job, he’s not a ‘bad guy’, and after growing tired of being ignored, decides to leave his game to prove that he can earn a medal in the hope of being accepted. 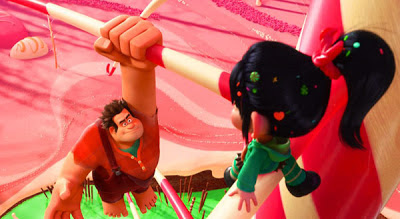 Wreck-It Ralph has some lovely visuals. It is rich in detail, and the movements of the characters (tics, glitches and all) replicate their peculiar in-game actions. The attempts to evoke nostalgia are reliant on fleeting references (a brief appearance from Bowser for example) and none of the worlds remained interesting for very long. Ralph isn’t even all that likeable. With Ralph out of Fix-It Felix Jr, the game from the perspective of the outside world is deemed to be broken. This will eventually lead to the unplugging of the console and the characters losing their homes. This is never a concern for Ralph, so preoccupied with his own mission that he doesn’t even consider the repercussions of his defection. Unfortunately Wreck-It Ralph lacks the heart of the Toy Story series, and is neither as funny nor as poignant.

Continue Reading at Graffiti With Punctuation.
Posted by Andy Buckle at 3:20 PM