Set against the backdrop of 19th-century France, Les Misérables tells the enthralling tale of Jean Valjean (Hugh Jackman, Australia), a man who survives nineteen years of imprisonment and becomes a town mayor. Pursued by a relentless police inspector after breaking his parole, Valjean involves himself in the lives of those that need his help. Tom Hooper’s (The King’s Speech) garishly epic screen adaptation of the timeless tale of redemption features a large ensemble cast and though his bombastic ambition doesn’t amount to a wholly successful work, there are some remarkable sequences. One can’t deny its sweeping spectacle and the fantastic work from most of the cast. 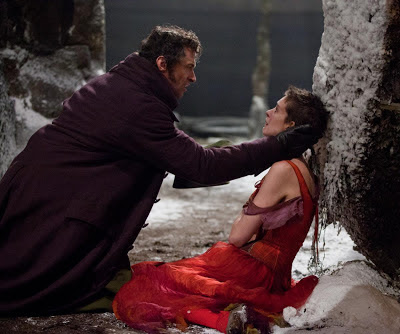 Les Misérables is adapted from the enormously successful Alain Boublil, Claude-Michel Schonberg and Herbert Kretzmer’s musical, the source of which is Victor Hugo’s 1862 novel. When Javert (Russell Crowe, Master and Commander), a man who strictly adheres to the law, becomes consumed by his obsession to re-prosecute Valjean, his pursuit culminates in their unexpected meeting on the frontlines of the Paris Uprising of 1832. Along the way Valjean takes upon the care of Cosette (Amanda Seyfried, Mama Mia), the illegitimate daughter of a factory worker, Fantine (Anne Hathaway, Rachel Getting Maried), forced into prostitution to care for the youngster. As a teenager Cosette falls in love with Marius (Eddie Redmayne, My Week With Marilyn), one of the student revolutionaries leading the revolts on the streets of Paris.

While there is every chance of the unacquainted musical novice falling under Hooper’s spell, this wearying tale is better catered for connoisseurs of the genre. The narrative is loaded and moves briskly (often too so), and though it is still a popular and relevant stage production, some sequences are clearly unsuccessful in the transition.


Continue Reading at Graffiti With Punctuation.
Posted by Andy Buckle at 9:14 AM