Princess Mononoke is one of writer/director Hayao Miyazaki’s longest and most complex films. Though it becomes somewhat difficult to follow at times, I find it to be one of his most imaginative and artistically triumphant creations to date, and one of his most emotionally rewarding fables. For a brief period (until Titanic was released a few months later) it was the highest grossing film of all time in Japan, so it is also one of Miyazaki’s most popular films. It won Best Picture at the 21st Japanese Academy Awards and incredibly was selected as Japan’s submission into the Academy Awards for Best Foreign Language Film. 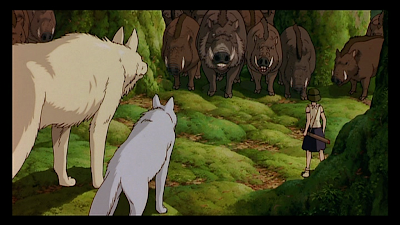 Rarely before has such energy between animation and storytelling been so apparent. Remember, this was released when Pixar Studios had just one film (Toy Story) to their name. The magnificently inventive Mononoke, blending myth and fantasy with stirring ideology and real-world ecological problems, has just as much tension as most live-action films, and though these beautifully realized animals and human characters are completely hand-drawn (unfathomable), we still find ourselves unsettled by the various conflicts and fear for them.
It is nothing short of a spectacle and almost immediately (that rampaging boar with black tentacles covering its body) you know you are watching something groundbreaking. The engrossing central conflict between humans and these mythical creatures, blended with this stirring environmental awareness, might just be Miyazaki’s masterpiece. If it weren’t for the pure magic of Spirited Away (2001), I’d say it would be.

In the spectacular opening sequence, Ashitaka, a young warrior from a remote and endangered Emishi village clan, kills a ravenous boar-monster who attacks his village. He discovers the poor beast is an infectious ‘demon god’ transformed by human anger. With his right arm infected with a deadly curse during the struggle, the young warrior learns that he has been granted vastly increased strength, but will eventually die from the infection. He sets out to the forests of the West in search of a cure, and to locate the origins of this benevolent threat. 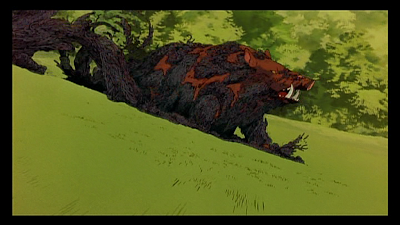 Along the way he meets Jigo, a nomadic monk who informs Ashitaka that his best chance rests with the forest spirit of a mountain range populated by giant animal gods. Located in this range is Iron Town, a proud settlement of humans and a kind refuge for social outcasts (lepers and prostitutes), governed by Lady Eboshi. Iron Town has been developing; clearing the nearby forests and producing advanced firearms, and as a result has tormented and become entangled in a bitter battle with the vengeful beasts of the forest.
Amongst these animals is a wolf pack, led by wolf goddess Moro, and accompanied by an adopted young woman named San – or ‘Princess Mononoke’ to Iron Town. Ashitaka intervenes in San’s infiltration and attempted murder of Lady Eboshi – getting caught in the struggle. Lady Eboshi, convinced that removing the head of the forest spirit (her primary obstacle and Ashitaka’s last chance of survival) is in the best interest of her people, is also facing conflict with imperial hunters and a returning Jigo, who wants the head for his own purposes. This epic fable, as complex as any war story, covers the interactions between greedy humans, innocent forest spirits (and the introduction of the little head-clicking creatures is a sight to behold) and powerful animal gods and gives them all full-bodied characterization. While the battles are tense and blood-drenched, moments of tranquility and beauty are also present, and the story raises admirable questions about mankind’s place in the natural order of the world. I’m not sure where Miyazaki’s inspiration for the mythology originated from but it is thoughtfully and intelligently established and explained. Sticking with it is well worth the effort. 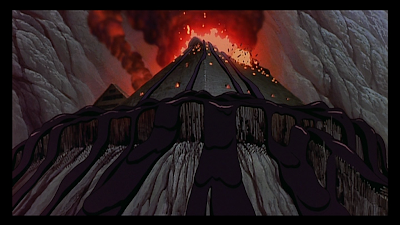 It has the heart and soul, and immense scale, of a grand epic, bringing in a blend of ancient folklore and an imagination at the height of inspiration. I will mention in closing that it is perhaps too dark and violent for children – directed more at adults both in the often-gory visuals, and the still-topical environmental themes. While I have enjoyed each of Miyazaki’s films so far in this marathon – and this was one of three I had watched prior to this undertaking – Princess Mononoke blows me away. If you haven’t seen it, you are missing out on an example of the barriers of animation being completely destroyed.
Posted by Andy Buckle at 3:50 PM