Now here is a quality Australian film. Wish You Were Here is a relevant, engaging and cleverly conceived drama, and the directorial debut of veteran actor Kieran Darcy-Smith. It is co-written by Darcy-Smith and his wife, Felicity Price (who also stars) and impressively, was selected to screen at the 2012 Sundance Film Festival. Blending the vibrant atmosphere of a beautifully lensed Cambodia with a suffocating and threatening mood of Sydney, this taut and powerfully acted story is told through a non-linear narrative style – and is amongst one of the better Australian films I have seen in the last few years. At least, it was one of the most emotionally stirring and conceptually satisfying. 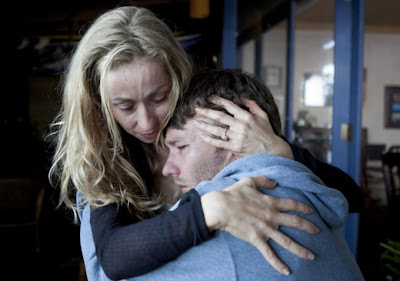 Alice (Felicity Price) and Dave (Joel Edgerton), soon to become proud parents of their third child, decide to accompany Alice’s sister Stephanie (Teresa Palmer) and her boyfriend, Jeremy (Anthony Starr), on a spontaneous trip to Cambodia. Jeremy, a businessman, is in town for work, and Steph, believing that her sister could use a tropical reprieve before adding another little one to the family, invites her along. Their relaxing retreat – and the sights and sounds of the country are conveyed during a beautiful extended montage accompanying the opening credits – soon turns regrettable, when Jeremy, after a night of drinking and drug-taking, disappears without a trace.
While Steph remains in Cambodia to be first-hand for any news, Alice and Dave return to their home in Sydney. Their formerly happy working-class lives have been punctured by this confusing, but irreparable circumstance, and each is individually shaken. Optimistic, they try to keep their grief and their gradual emotional distancing from their young children and continue with their work. Truths about the night begin to emerge and we are revealed, via flashback, snippets of their holiday. These are hints to the truth, and motivations behind Jeremy’s business trip. Dave, obviously scared and anxious, is keeping something to himself, while Alice, aware that drugs influenced the evening’s party and concerned about the suspicious behaviour of her husband and the instability of her sister, desires police involvement. Even more damning details emerge, forever challenging the familial bonds.

Divulging any more is a definite disservice to an interested reader. The film keeps you guessing the entire duration, offering up several clever misleads – but isn’t particularly successful at hiding its manipulative mode of storytelling. While it is thrilling to speculate as to what actually happened in Cambodia – and the mood captured in Sydney is brimming with stifling suspense, especially whenever Dave becomes suspicious of information being transferred and becomes anxious when suspicious vehicles follow him - we know we are going to be revealed to something new, and we have a pretty good idea who will eventually tell us. This is certainly not a major criticism of the film, because the taut, expertly edited storytelling and the completely convincing performances ensure that there is never a dull moment.
The scenes at home between Edgerton and Price involving their children felt completely natural, and I found all the performances to be exceptional. The child actors did a fine job, but Price, and especially Edgerton, are very impressive. Edgerton is a fine actor, evident in his work in Animal Kingdom and Warrior, and when we learn more about what transpired, we further appreciate and sympthise with his self-assigned discretion. On the other hand, Alice’s reactions to the news and Dave’s bizarre behaviour is somewhat irrational, though always completely justified. Brilliant work.
The success of the storytelling, like in We Need to Talk About Kevin, Martha Marcy May Marlene and Burning Man for example, rests in the editing. To tell a non-linear tale – and to gradually introduce audiences to events in the past, while keeping the present events running smoothly, rests in the thoughtful introduction of these inserts. What is especially impressive about this film is the fact that the crumbling of Dave and Alice’s trust for one another is directly linked to the events that occurred on their holiday – and as they are revealed to the audience, their relationship is affected. On one level it is a holiday gone wrong, and the other it is a domestic unraveling. Both layers are brilliantly conveyed. 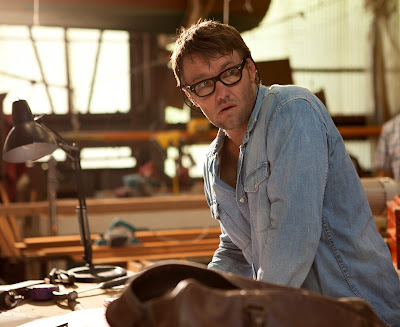 The ending, though it initially implies more than it intends, is completely satisfying – and this is a qualm I know some reviewers have had with the film. I understand that, but I think ample hints are given to what ultimately transpires and I bought the eventual reveal. Spontaneous things happen in unsavory parts of the world. This is a taut and concise film. Not a minute is wasted – and scenes that appear to be inconsequential, ultimately serve a purpose. A great Australian film comes across once in a blue moon. Last year we had two. Wish You Were Here is another. Highly recommended.
★★★★ (B+)
Posted by Andy Buckle at 12:07 AM