Porco Rosso is the sixth film directed by Hayao Miyazaki and was released by Studio Ghibli in 1992. At the centre of his tale is not a young female heroine, or a child, but an unlikely male hero– a chauvinistic Italian WWI fighter pilot named Porco Rosso.

Porco Rosso is the first Miyazaki film I have experienced that has a clearly defined historical and geographical setting (the Great Depression and the Adriatic Sea) but he still manages to infuse the tale with rich fantasy. The story follows Rosso, a deserter from the Italian military (who are still in pursuit of him), now earning a living as a freelance bounty hunter chasing ‘air pirates’ who prey on cruise ships on the Adriatic. 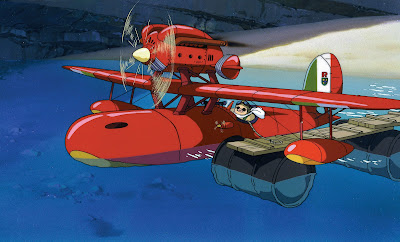 He lives on his personal deserted island retreat, hunts down the bandits in his bright red bi-plane and frequents a popular resort run by Gina, the widow of one of his fallen war buddies, a close friend, and the woman his heart swells for. But what makes Rosso unique is his appearance – that of a pig. This is courtesy of a mysterious curse placed on him during an ill-fated mission, which resulted in his entire squadron being wiped out. His affliction hasn’t hampered his skills in flight, but living in a world of tumultuous politics, under appreciated service, and an impossible romance, he is world-weary and cynical, and for lack of a better term, ‘pig headed’.
Following an exciting opening sequence, which sees Rosso rescue a class of overly jovial school students who had been kidnapped by sky bandits, targeting the spoils present on their cruise ship, the bandits hire a strapping American, Donald Curtis, to take down Rosso. After engaging in a dogfight, which sends Rosso crashing to the ground (and declared dead by Curtis), he takes his damaged plane to a repair hangar in Milan, the territory of the Fascist Government hunting him, run by an elderly mechanic named Piccolo. He enlists his spunky granddaughter, Fio, to the job, and after initially being skeptical of her substantial technical prowess; Rosso is amazed by what she achieves. He takes her along with him to be of further mechanical service, but will his repairs and upgrades be enough to defeat his well-financed rival?
Porco Rosso, formerly a strapping young man named Marco Pagot (an homage to the Pagot brothers, pioneers of Italian animation, I believe), is nothing short of a scoundrel. He is a sexist and a flirt, he is lazy and antisocial, and is rarely without a drink or cigarette in his hand. He is certainly not a positive role model for children, but one more appreciated by a mature audience. He is easy to like, and adults will understand what he has lost, and empathise with him. What makes Porco Rosso accessible for youngsters is again the absence of a truly evil villain. It is pleasant, light-hearted, and easily decipherable fun, and though many viewers won’t pick up on Miyazaki’s unashamed self-indulgence and cues to cliché (I didn’t always either), it is entertaining. The air pirates, set up as the antagonists, become less so as the film progresses (similar to Castle in the Sky). Even Curtis has some redeeming qualities in the end, while Rosso’s change in attitude towards the enthusiastic but innocent Fio is touching. 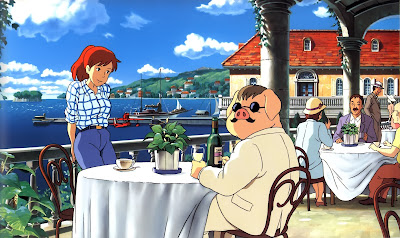 There are enough gags and impressive aerial set pieces to keep children riveted, I mean, who doesn’t love a chase sequence, but it will not be the first Miyazaki I will pull off the shelf to show my kids. Much like all of Miyazaki’s films, the animation is impeccable and the musical scoring is beautiful, though the latter doesn’t feature amongst Joe Hisaishi’s best works. The detailed mechanics of his planes, and the design of Piccolo’s hangar are truly astounding. There is also a nice noirish tone to the film when it is on the ground. Rosso, a peculiar but memorable character (more memorable than the film, at least) strolls around in a trench coat – and in a way seems to be a throwback to Rick Blaine in Casablanca. While Miyazaki seems most at home having his characters soar through the air, and these sequences of flight are as extraordinary as ever, the story remains almost as interesting on the ground.
Curtis is Rosso’s counterpart in more ways than one. Their aerial battle, which places Fio’s future livelihood and youthful innocence at stake, is the result of Curtis’ unclear desperation to marry the first beautiful woman he encounters. There is further complication when Curtis meets Gina, and tries to woo her by boasting about his defeat of ‘her pig’ and inviting her to America to share his dreams of becoming a Hollywood movie star. Miyazaki’s use of intelligent and brave female characters is not sidelined here. Due to most of the male work force emigrating to find work, Piccolo has constructed a workforce of his female relatives. Though his lead is a male, he still provides his usual strong female characters in support. 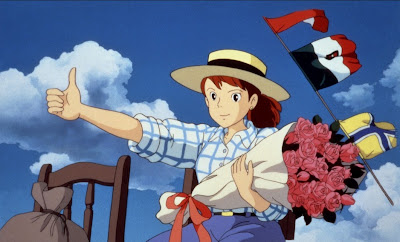 What disappointed me about this film was actually the central struggle between Rosso and Curtis. I didn’t feel like the driving force – repairing and upgrading Rosso’s plane to battle his rival – was especially engaging. While I enjoyed learning more about Rosso – his relationship with Gina, his changing respect for Fio and his recount of a surreal war story; a battle which results in the loss of his comrades and his beautifully animated experience above the clouds – I found the climax (a really silly fist-fight, which had a tone that shifts between cartoonish and brutal) to be disappointing and anticlimactic. Still, Porco Rosso is worth a look, but it is far from my favourite Ghibli release to date.
Posted by Andy Buckle at 4:09 PM