Grave of the Fireflies is a 1988 animated anti-war film from Studio Ghibli, written and directed by Isao Takahata. It is, I believe, an adaptation of the semi-autobiographical novel of the same name by Akiyuki Nosaka, intended as an apology to the author’s own sister. That is an extraordinary fact. Grave of the Fireflies, in short, is a devastating film. The story is punctuated by profoundly beautiful moments – both in the intricately animated visuals, and in the heartfelt relationship between the orphaned siblings, 14-year-old Saita and his 4-year-old sister, Setsuko – but it is an extraordinarily sad tale. Unexpectedly, it did not cause me to cry, and I will delve into one of the reasons I think this might be the case a little later. 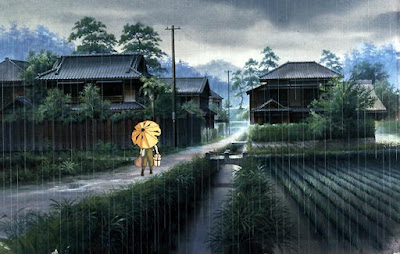 With their father away serving in the Imperial Navy, Saita and Setsuko live with their mother in the port city of Kobe. Towards the end of WWII the city is firebombed by American bombers and almost completely destroyed. With their mother severely wounded and taken to hospital (where she later dies from her burns), the siblings are left to fend for themselves. They initially stay with their contemptuous aunt, their father’s sister, but she resents the time and money they require, has little affection for them and views them as a burden.
She calls them lazy and thankless and criticizes Seita for not joining the Navy like his father, declaring that he sits around and does nothing, and doesn’t deserve the food she cooks and serves for them. He makes a choice, when his mother can no longer protect Setsuko, to devote his life to protect his sister and to choose the right moment to relay the news of their mother's death to her. This is what makes the film undeniably affecting.

Seita resorts to stealing to feed his sister once their meager supplies – they were forced by their aunt to sell their mother’s kimonos for rice – have been exhausted as they shelter in a cave by a stream. Grave of the Fireflies is a war film, capturing the harrowing tale of suffering experienced by many during the air raids on Tokyo that left the city decimated and many homeless and fighting desperately to survive. Nosaka and Takahata capture these horrors through the unique experiences of these two innocent children. 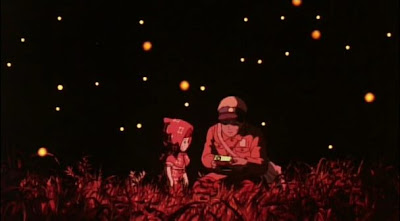 The early scenes of Seita running through the burning city with his sister tied to his back possess some powerful images, and convey just how close they will become throughout the course of the journey. The sequence where the two capture fireflies and use them to illuminate their cave is truly a sight and one of the most memorable moments in the film. The next morning Seita finds his sister burying the fireflies, accepting their mortality as she secretly accepts her mother's.

Though Seita tries to bring delight to Setsuko throughout the film, their desperate situation also causes them to be at odds with one another too. In one heartbreaking scene in particular, Seita rolls over and hugs Setsuko while she is sleeping. She pushes him off and rolls away. It is one of the few times she has repelled his affection – but it tells so much.
The opening of the film actually threw me a little bit. I never expected it to open with the sequence that it did. It might be the primary reason why the ending did not quite leave the impact on me that it has for many others. Don’t get me wrong, the film continued to haunt me after watching, but I found this to be one feature that disappointed me slightly. Apart from that, there is little to detract from the awe-inspiring power of Grave of the Fireflies. 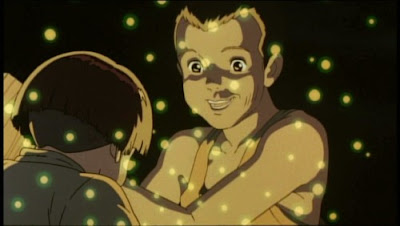 Learning the fate of one of the characters might seem to an unfamiliar reader to be a big spoiler, but ultimately for this film it is the journey along the way – the devastating destruction of Kobe and Tokyo, their extremes of malnutrition, the way Seita tries to offer Setsuko as much freedom to be a child as he can, his attempts to find nourishing food and medical help for his sister, and the indecency of the people they encounter – that is the most important feature. Everyone they cross paths with is in the same state of desperation and their personal resources, like their country's, are overtaxed. Acts of kindness are rare because anything spared endangers their own survival.
The film is gripping because the two siblings are so accurately characterised. It feels like we are watching real human children, and not the work of animators. Setsuko is absolutely adorable. Their story certainly possesses the power of a real human story and the animation doesn’t lessen the realism of the chaos and destruction, and their desperate attempts to survive. For me, it is a new experience watching an animated film, which are usually so pleasant and magical, to be so grounded in the harsh reality of war and delve into such devastating themes. 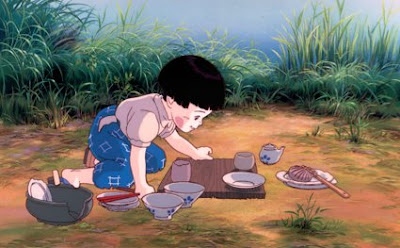 Grave of the Fireflies, visually, is a thing of beauty. I won’t go into details, because I am not confident I will serve the film justice. But be warned, there are some gruesome images present in this film, and though the two central characters are children, this is not a film for young children. It is an adult animation – capturing the destruction of childhood innocence as a result of warfare, but in addition to being an animated film it also functions as a deeply affecting anti-war film. An essential.
Posted by Andy Buckle at 3:33 PM