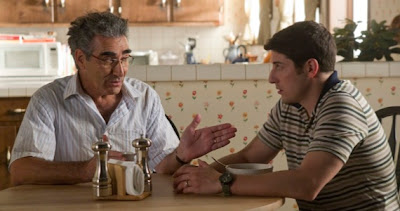 There are a six releases hitting Australian cinemas on Thursday April 5. They are Titanic (in 3D), James Cameron's spectacular epic returns to the big screen, American Reunion, which brings the band from American Pie back together again, Pirates! Band of Misfits, an animated adventure from the creators of Chicken Run, Salmon Fishing in the Yemen, the comedy/drama starring starring Ewan McGregor and Emily Blunt, This Must Be The Place, starring Sean Penn as a former rock star on a quest to avenge his estranged father, and Goodbye, First Love, a French romantic drama that recently played at the Alliance Francaise French Film Festival.

Titanic 3D - Inspired by the 1985 discovery of the Titanic in the North Atlantic, the contemporary storyline involves American treasure-seeker Brock Lovett (Bill Paxton) retrieving artifacts from the submerged ship. Lovett looks for diamonds but finds a drawing of a young woman, nude except for a necklace. When 102-year-old Rose (Gloria Stuart) reveals she's the person in the portrait, she is summoned to the wreckage site to tell her story of the 56-carat diamond necklace and her experiences from 84 years earlier. The scene then shifts to 1912 Southampton where passengers boarding the Titanic include penniless Jack Dawson (Leonardo DiCaprio) and society girl Rose DeWitt Bukater (Kate Winslet), returning to Philadelphia with her wealthy fiance Cal Hockley (Billy Zane). After the April 10th launch, Rose develops a passionate interest in Jack, and Cal's reaction is vengeful. At midpoint in the film, the Titanic slides against the iceberg and water rushes into the front compartments. Even engulfed, Cal continues to pursue Jack and Rose as the massive liner begins its descent. Titanic is being re-released in converted 3D. I was lucky enough to attend the launch and special presentation at Event Cinemas George Street. The info and my thoughts are linked in the title. If you haven't seen Titanic on the big screen, it is well worth a look.

American Reunion - All of the American Pie characters we met a little more than a decade ago return to East Great Falls for their high-school reunion. In one long-overdue weekend, they will discover what has changed, who hasn't and that time and distance can't break the bonds of friendship. It was the summer of 1999 when four small-town Michigan boys began a quest to lose their virginity. In the years that have passed, Jim and Michelle married, Kevin and Vicky said goodbye and Oz and Heather grew apart. Now these lifelong friends have come home as adults to reminisce about, and get inspired by, the hormonal teens who launched a comedy legend.

Pirates! Band of Misfits - Hugh Grant stars in his first animated role as the luxuriantly bearded Pirate Captain - a boundlessly enthusiastic, if somewhat less-than-successful, terror of the High Seas. With a rag-tag crew at his side (Martin Freeman, Brendan Gleeson included), and seemingly blind to the impossible odds stacked against him, the Captain has one dream: to beat his bitter rivals Black Bellamy (Jeremy Piven) and Cutlass Liz (Salma Hayek) to the much coveted Pirate of the Year Award. It's a quest that takes our heroes from the shores of exotic Blood Island to the foggy streets of Victorian London, never losing sight of what a pirate loves best: adventure!

Salmon Fishing in the Yemen - When Britain's leading fisheries expert (Ewan McGregor) is approached by a consultant (Emily Blunt) to help realise a Sheikh's (Amr Waked) vision of bringing salmon fishing to the Yemen desert, he immediately thinks the project is both absurd and unachievable. But when the Prime Minister's overzealous press secretary (Kristen Scott Thomas) latches on to it as a "good will" story, this unlikely team will put it all on the line and embark on an upstream journey of faith and fish to prove the impossible, possible.

This Must Be the Place - Cheyenne is a former rock star. At 50 he still dresses "Goth" and lives in Dublin off his royalties. The death of his father, with whom we wasn't on speaking terms, brings him back to New York. He discovers his father had an obsession: to seek revenge for humiliation he had suffered. Cheyenne decides to pick up where his father left off, and starts a journey, at his own pace, across America. I don't know about this one. It looks extremely odd, but Penn is one of the best in the business, and it stars and features the music of David Byrne (Talking Heads) so that is reason alone to see it.

Goodbye, First Love - Fifteen-year-old Camille (Lola Creton) is a serious, intensely focused girl who has fallen in love with cheerful Sullivan (Sebastian Urzendowsky), an older boy who reciprocates her feelings, mostly, but wants to be free to explore the world. When he leaves her to travel through South America, she is devastated. But over the next eight years, she develops into a more fully formed woman, with new interests and new love - and the possibility that she'll be less defenceless when Sullivan enters her life again.


Weekly Recommendation: Likely to be the best cinematic experience released this week is Titanic, which is 15 years old. Pirates! will provide some fun for families, while Salmon Fishing in the Yemen, one of the three I have seen this week, will hit the spot for viewers seeking a light, easy to watch, feel-good story. I am yet to hear very much positive about Goodbye, First Love and you'll have to get back to me later in the week on whether American Reunion is worth watching. UPDATE: It is not.
Posted by Andy Buckle at 1:28 PM