New Release Review: This Must Be The Place (Paulo Sorrentino, 2012)

This Must Be The Place is an unusual film. Its bizarre oddities aren’t anywhere near as hard to accept as the trailer suggests and it remains consistently intriguing and always entertaining. It is a rich character study and a wonderfully weird and ambitious American road movie from master Italian director, Paolo Sorrentino (Il Divo), directing his first English language film. This Must Be the Place played in competition at the 2011 Cannes Film Festival, and is one of the best films to hit screens in 2012 so far. 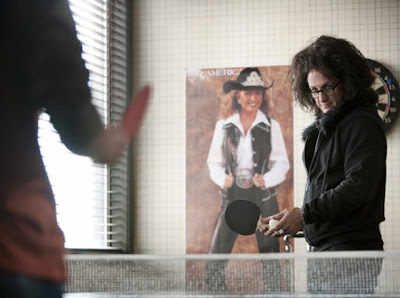 Cheyenne (a performance of incredible precision from Sean Penn) is a former 80’s rock star living in his reclusive Dublin mansion with his devoted wife, Jane (Frances McDormand). Retired, but growing increasingly bored (or is it depressed?) by his purposeless, self-involved existence, he lives off his royalties and still dresses like his younger ‘Goth’ rock star self – dark clothing, wild unkempt hair, eye and face make-up, earrings and red lipstick. He shares touching moments with his wife and hangs out with one of his teenage fans (Eve Hewson), and is continually plagued by the knowledge that two teenagers committed suicide have been influenced by his lyrics.
When Cheyenne hears that his father, with whom he has not spoken to in decades and was not on good terms with, is dying, he travels to the United States to be with him in his final hours. He arrives too late but later learns of his father’s humiliation at Auschwitz at the hands of a former SS officer, Aloise Lange, and his lifelong obsession with finding the man. It is believed Lange is hiding in American under a different name. Despite the skepticism of Mordecai Midler (Judd Hirsch), a professional Nazi hunter, Cheyenne borrows a truck from his friend Ernie Ray (Shea Wigham), and sets off on a road trip across America to track down the elusive war criminal. 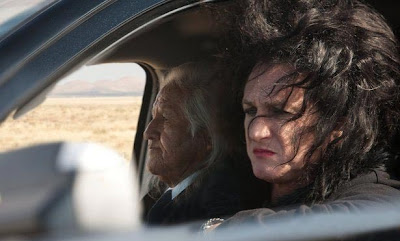 Though Cheyenne is a man on a mission, haste isn’t one of his strong suits. He struts around at a snail pace, kind of floating through life, and is usually pulling something along with him; a grocery cart or his small suitcase. There are some stunning long shots of Cheyenne as he navigates the changing landscape, and Sorrentino’s image of America rivals Wim Wenders extraordinary vision in Paris, Texas. It is then fitting that Harry Dean Stanton should make an appearance - as the inventor of the wheeled suitcase of all things. In addition to Stanton’s character, Cheyenne also runs into his longtime friend, David Byrne (Byrne is Talking Heads’ front man and the creator of the song where the film’s title derives), an elderly history teacher (Cheyenne only knows about the Holocaust in a general sort of way), and Rachel (Kerry Condon), a single mother who takes him in when he comes through New Mexico. How he impacts on the life of her and her son is undeniably touching.
This Must Be The Place is funny in a droll, deadpan sort of way – whether Cheyenne debates the reasons his pool has no water in it, is listening to his friend discuss the method of making love to a woman with a leg cast, or correcting the fact that ‘Mick Jagger once sang with him’, it is full of great dialogue and clever self-referential comedy. Visually, there are plenty of laughs too – and the seeming impossibility of Cheyenne’s quest, which takes him through New York, New Mexico and Utah, remains a quest we mysteriously find ourselves wholeheartedly embracing. 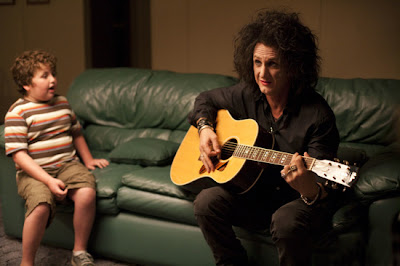 Part of the reason is because Cheyenne is such an eccentric and fascinating character. He has such a heart, and his endearing qualities win everybody over. Whether he is playing matchmaker, extreme handball in his waterless swimming pool, schooling kids at ping-pong, or simply sipping on his orange fizzy water through a straw, he never fails to be interesting. Penn is in Robert Smith (of The Cure) mode with an expression that is consistently bemused or expressionless (though his rare expressions of emotion are faultlessly captured in close-up). When he converses in his soft, high-pitched tone he never says very much, but manages to convey all that is necessary. He has a sweet, child-like honesty, and though it seems like he has a screw loose at times, he is completely aware of everything going on around him.
This oddball collaboration of far-out comedy and heartbreaking drama is highly original and unpredictable filmmaking from Sorrentino, and inventively put together. The photography from Luca Bigazzi is sublime and almost every shot in this film is a work of art on its own. One of the highlights is a one-shot of Byrne’s live concert performance of ‘This Must Be The Place’. After drawing the camera back slowly to reveal Byrne and his accompanying band, it leaves the stage and scans the audience, finding Cheyenne buried in the crowd and focusing in on his tear-welled eyes. Byrne’s small cameo was fun and his music (with lyrics written by Will Oldham aka Bonnie “Prince” Billy) perfectly accompanies the bizarre events. 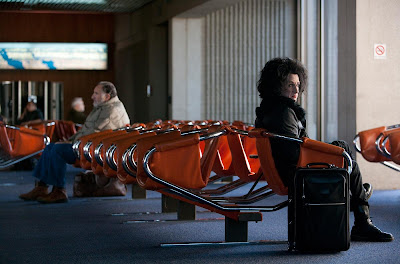 Sure, it is a little needlessly indulgent at times. Some of the elaborate crane shots didn’t serve any purpose, but for this reviewer they only enhanced the experience. There is perhaps a little too much going on – Frances McDormand is forgotten about in the second half, and a subplot involving Mary’s missing brother is confusing, and not satisfactorily resolved. Still, there is plenty to admire here, and for a film that moves as patiently as this one, the 118 minutes disappears. Penn is astonishingly good, and Cheyenne's eccentricities, the film’s surreal qualities and the memorable cameos will continue to linger with you long after the film.
My Rating: ★★★★1/2 (A-)
Posted by Andy Buckle at 11:59 AM