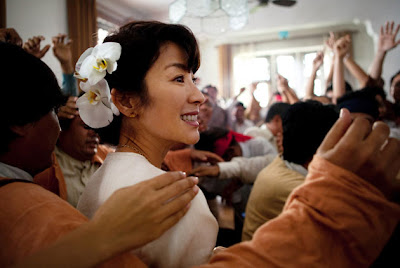 There are five new films hitting Australian cinemas on Thursday April 19 - The Lucky One, Footnote, The Lady, StreetDance 2 and Romantics Anonymous, which continues this ordinary streak of releases.

The Lucky One - U.S Marine Sergeant Logan Thibault (Zac Efron) returns from his third tour of duty in Iraq, with the one thing he credits keeping him alive - a photograph he found of a woman he doesn't even know. Learning her name is Beth (Taylor Schilling) and where she lives, he shows up at her door, and ends up taking a job at her family-run local kennel. Despite her initial mistrust and the complications in her life, a romance develops between them, giving Logan hope that Beth could much more than his good luck charm. It is not just dull and predictable, but a serious drag. It is all explained in my review.

Footnote - Eliezer and Uriel Shkolnik are both eccentric professors, who have dedicated their lives to their work in Talmudic Studies. The father, Eliezer, is a stubborn purist who fears the establishment and has never been recognised for his work. While his son, Uriel, is an up-and-coming star in the field who appears to feed on accolades, endlessly seeking recognition. Then one day, the tables turn. When Eliezer learns that he is to be awarded the Israel Prize, the most valuable honor for scholarship in the country, his vanity and desperate need for validation are exposed. Uriel is thrilled to see his father's achievements finally recognised but, in a darkly funny twist, is forced to choose between the advancement of his own career and his father's. Will he sabotage his father's glory?

The Lady - Tells the extraordinary story of Aung San Suu Kyi and her husband Michael Aris. It is also the epic story of the peaceful quest of the woman who is at the core of Burma's democracy movement. Despite distance, long separations, and a dangerously hostile regime, their love endures until the very end. A story of devotion and human understanding set against a backdrop of political turmoil that continues today. The Lady was written over a period of three years by Rebecca Frayn. Interviews with key figures in Aung San Suu Kyi's entourage enabled her to reconstruct for the first time the true story of Burma's national heroine. Review to come later today.

StreetDance 2 - When top street dancer Ash (Falk Hentschel) is humiliated and laughed off stage by American crew Invincible, he sets off to gather the best dancers from around the world to take them on - with a dance style they weren't expecting. With landmark locations, a spectacular fusion of dance styles and vibrancy, this sequel sees our hero fall in love with a beautiful salsa dancer, as he discovers the magic, power and passion of dancing for the ultimate global dance off. From the trailer, this looked to have plenty of energy, but dance flicks aren't my thing.

Romantics Anonymous - Tells the story of Angelique (Isabelle Carre), a gifted chocolate-maker who uncontrollable shyness prevents her from acknowledging her talents. Struggling chocolatier Jean-Rene (Benoit Poelvoorde), who also suffers from a similar case of awkward bashfulness that threaten to drown his company, hires Angelique as his new sales associate. Realising she's attracted to her boss, Angelique decides to anonymously develop a new line of chocolates to save the company. With the future of the business hanging in the balance, Angelique and Jean-Rene must overcome their limitations and confess their sweet affections for one another in this delectable comedy. I have had several chances to see this film, but haven't been able to make it to the screenings. I keep seeing it described as being 'as sweet as chocolate' and 'very French' - and my interest has quickly wavered.


Weekly Recommendation: The line-up at the cinema at the moment is less than stellar. The pickings are slim. With the exception of Footnote, which is very good, this week doesn't offer anything worthwhile. The Lady was very disappointing. Though well-intentioned, it is a wayward and unconvincing screen portrayal of an iconic national heroine. Romantics Anonymous might be light, digestible entertainment for romantic buffs, but if you can, check out This Must Be The Place, Le Havre and The Raid (the latter may not be playing, however) OR hold onto your money for next week...The Avengers.