The Lady, directed by Luc Besson from a screenplay by Rebecca Frayn, covers an extraordinary tale that deserves to be told – and the final 20 minutes are undeniably moving – but for the most part this earnest but unconvincing film is supremely disappointing. It is a pity that the rest of the film lacked the heart and soul present in the emotionally-charged conclusion, because such an iconic female figure deserved a lot better than this lackluster, if well-intentioned, screen portrayal. 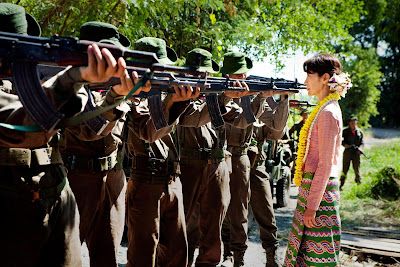 We never feel the emotional impact of the struggles of Myanmar’s Nobel Peace Prize-winner Aung San Suu Kyi (Michelle Yeoh) in Burma, despite being restricted to many years of house arrest in Rangoon and having her closest colleagues and many of her student supporters imprisoned and/or killed. She endures a self-motivated hunger strike, finds her righteous morals opposed by threats from the military junta, and is continually forced to overcome prolonged isolation and emotionally crippling separation from her devoted family.

The Lady tells the devotion of one woman, Burma’s national heroine, whose humanitarian understanding ensured that despite facing political turmoil and violent pressure, she would be instrumental in building a better future for Burma.
The daughter of an army general who helped to liberate Burma, we are first introduced to Suu as a child on the day her father is gunned down. Returning to Burma decades later to visit her ill mother, she is encouraged to take up her father’s course and lead the nation into democracy. It is hard to get involved in her struggle when so many significant scenes are so poorly conceived and written. The portrayal of the military, who scheme ways to put pressure on her, is especially ridiculous. They actually drew unintentional laughter.
The film has a split narrative, with Suu’s Oxford academic husband, Michael Aris (David Thewlis), continuously working to have her considered for the Nobel Peace Prize to strengthen her protection from assassination, and tries to secure Visas for him and his sons to return to Burma (Suu can leave Burma but knows she would never be allowed to re-enter the country). These dull scenes are choppily edited into Suu’s experiences and almost every sequence involving Michael and either his sons or his twin brother (also played by Thewlis) is corny and unconvincing.
We are continually told that the Burmese people idolized her, and the film takes every opportunity possible to present her as the perfect wife/mother (her children, who have too much screen time, do little more than look at their mother in awe) and Burma’s ‘only’ hope. Her achievements are extraordinary, no doubt, but when the account is this simple and rushed – it is episodic and skims across the surface of several decades, often thrusting us into the middle of a new chapter of her struggle – it is hard to empathize.
Yeoh is strong and well suited to the role, but it is a shame that her character’s goodwill is lost amidst bad dialogue and this insistence on involving her family every step of the way. The film is supposed to focus on Suu (the eponymous ‘Lady’) but we rarely ever seeing her deal with her struggle or make decisions on her own. Her husband and children are very often by her side (and close to half the film is addressing Michael’s story). We don’t get into the heart and soul of this determined woman. That isn’t Yeoh’s fault, but that of Luc Besson, who never seems to have a grasp on his film. Thewlis’ character just wasn’t an interesting person, and though Michael played an integral role in having Suu’s achievements recognised, Thewlis' overly mannered delivery and air of pompousness, grew wearying. There is also a peculiar mix of spoken Burmese and English throughout the film, which comes across as lazy.
Technically, the film is very poorly edited, and the rhythm is off from the opening minutes, while the image is continually entombed in a golden glow, which often gives it a pleasant grace, but on most occasions, results in it feeling like a tele-movie. The Lady is rarely engaging, and despite strong work from Yeoh and a satisfying resolution, this trite and unconvincing account is a big disappointment from Besson (who has directed a 90’s classic - The Professional), considering the powerful story, relevant politics and iconic heroine at its core.