Prior to watching The Deep Blue Sea, I was not familiar with the work of Terence Davies, but amongst his directed films are The House of Mirth (2000) and Of Time and the City (2008). He has a very particular style that will certainly not appease all tastes, and to be honest, I don’t have any intention of watching any more of his films. The Deep Blue Sea is an adaptation by Davies himself of Terence Ratigan’s famous 1952 play – chronicling the story of a young woman who leaves her husband, a respectable High Court Judge, to continue a passionate affair with a younger RAF pilot. 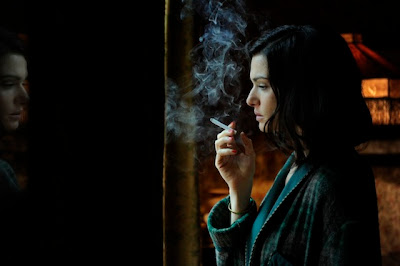 The majority of the film takes place in the flat of Hester Collyer (Rachel Weisz) on the day she had decided and ultimately fails to commit suicide. As she recovers, having been discovered by the landlady and other tenants, we are revealed to her story through a mosaic of flashbacks which explain her motivations. She is married to a High Court Judge, Sir William Collyer (Simon Russell Beale), and though living a comfortable lifestyle, the marriage is void of passion and she finds herself constrained. Seeking to have her sexuality awakened she starts a passionate affair with a handsome Royal Air Force pilot, Freddie Page (Tom Hiddleston), with whom she falls in love with. In short, it is love at first sight.
Hester keeps the affair a secret, but upon William’s discovery, Hester moves into a small London flat with Freddie. Her former life of luxury is now reliant on the reckless Freddie, who often needs to leave London for work. Soon enough his affections diminish and their passion is lost. Hester faces a dilemma. She is emotionally desperate, but unwilling to return to her husband. When Freddie discovers the suicide note - addressed to him – the tension between the couple hits a boiling point and Hester tries desperately throughout the night and in the days that follow to explain her desperate actions and draw forgiveness from the man she thinks she loves.

Terence Davies has adopted a classic, period piece style for The Deep Blue Sea and the whole film possesses a hazy, dream-like appearance. Plenty of attention has gone into dressing the sets and selecting the costumes, and the way Davies has utilized music is also commendable. There are some beautiful compositions. The opening shot is a long take from the street level, which captures the coming and going of several of the tenants in the building of Hester’s flat. It is impressive. Then there is the shot of Hester and Freddie locked in a tight embrace in bed together with the camera positioned directly above them and spinning. Unusual. In some sequences, which merely capture Hester smoking, the use of light makes the smoke look like it is has a life of its own.
But, it is in the thin and overly melodramatic storytelling, and the laboured pacing where this film simply did not win me over. Not a lot actually happens, with lengthy scenes of dialogue padded by the pauses between the character’s exchanges. The Deep Blue Sea did not engage me nor maintain my attention. Just as Hester’s apartment got increasingly smoky – she stares out the window and smokes cigarettes for a larger portion of the film than necessary – my interest in her unsympathetic story quickly wavered.
The film is also so purposefully paced that unless these characters are actively compelling you, it is easy to be lulled into a hazy state of boredom. It is never really made clear why Hester decides to commit suicide on that specific day – though it is alluded to that Freddie had forgotten her birthday. Rather than facing a passionless marriage or a loveless affair, Hester turns to a combination of pills and gas to avoid the deep blue. This character study about being torn between complex relationships will find an audience. While the story itself is only moderately interesting, Davies’ style, the film’s glacial pace, and the fact that these characters are all hard to sympathise with, makes for a difficult watch. 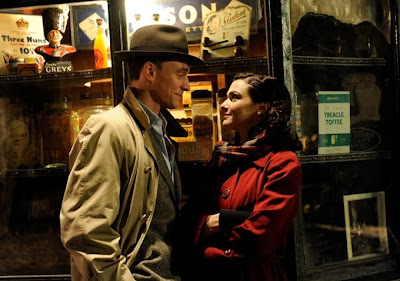 The film does win some points for Weisz's vulnerable performance, convincingly capturing Hester’s conflicting emotions: her evident displeasure at her marriage, her schoolgirl infatuation with Freddie, her post-suicide embarrassment and ultimately her desperate begging for Freddie to come back home with her. Tom Hiddleston, crafting a character that oozes charm and possesses a likeable exterior, but one troubled and erratic beneath the surface, is mostly successful. In the film’s dramatic centerpiece, which offers up one of the few surprises in the film, I felt like Hiddleston grossly overacted, though. Hard to recommend for anyone not familiar with the stage play, or previously acquainted with Davies' work. Credit is due to Florian Hoffmeister's photography and Weisz, but little else.