Footnote is an Israeli drama written and directed by Joseph Cedar. It screened at the 2011 Cannes Film Festival, where Cedar won Best Screenplay and it was Israel’s nominated representative in the Foreign Language Film category at the Academy Awards. The story revolves around a power struggle between a father and son who each teach at the Talmud department of the Hebrew University of Jerusalem. 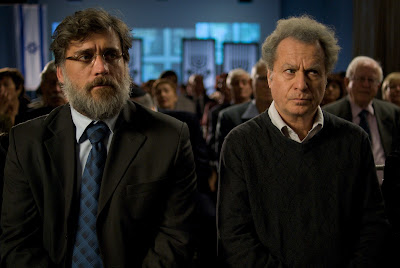 It is a fresh, stirring and stimulating portrait of professional rivalries and the merits of academia, especially in a field this unknown to a lot of people. Footnote is dramatically gripping, inventively put together (using an array of unique and energetic stylistic choices) and often amusing, and though it features a layered story and focuses on a potentially dry concept, it is pleasant and easily digestible.
Uriel Shkolnik (Lior Ashkenazi) is a charismatic and popular academic, well regarded by the department and respected by his pupils. The film opens with an awards ceremony (an extraordinary single take) where Uriel is accepting his election to the Israel Academy of Sciences and Humanities. The focus of this sequence, however, is on his father Eliezer (Shlomo Bar Aba). The camera never leaves his face as he looks on in a combination of boredom, bitterness and envy. As a stubborn old purist, Eliezer has grown frustrated that his lifetime of research and dedication to Talmudic Studies has continually been overlooked.
To fill in readers, courtesy of the production notes supplied at the screening, Talmudic studies is an attempted approach to the Talmudic Literature – a compilation of Jewish texts written in Palestine and Babylon circa 200-500 AD, including some of the greatest works of the Jewish people – with an objective and scrutinizing eye, while applying diverse academic tools of critique. Delving into the historical background of these texts and what they reflect has been considered a controversial area due to the consideration of these traditional works as ‘sacred’ and not to be scrutinized under academic-analytical study. It is for this reason that Eliezer’s consideration has been continually disregarded for the Israel Prize.

Eliezer’s lack of infamy is revealed early on when he steps outside for a breather and isn’t recognized and barred re-entry. His claim-to-fame is his mention in a footnote from a text by a famous scholar, which he hangs proudly on the wall of his study, but beyond that, he has very little to his name. It is his son who has continually been credited with sought-after accolades. This is largely due to the publishing of similar academic findings by a rival scholar, Prof. Yehuda Grossman (Micah Lewensohn) before Eliezer.
At home he shuts out the world with a pair of giant headphones, and takes the same route to the public library every day. He has succumbed to a dreary life of routine and antisocial behaviour, never escaping his evident disappointment. Then he receives the call he has been anticipating for over a decade – and his life takes a dramatic turn. Little does he know what transpires as a result of this decision. I thoroughly enjoyed Footnote. I liked how it looked at accolades, and how satisfaction and contentment are aroused by accolade, as well as the merits of devoting ones life to a specific field.
The centre point of this film is the complex father/son relationship – which offers up some fantastic sequences of each individually divulging their opinions on each other’s approach to Talmudic Studies and the merits of their individual work. The way that both men react to the news of Eliezer being awarded the Israel Prize is really intriguing. Uriel’s meeting with the board of selectors in a tiny cramped room, which means everyone has to stand and manouver their chairs to clear the door space and let someone enter, is really funny. This scene also features some fantastic acting from Ashkenazi – who despite being shocked by a grave error in administration, and flattered by the announcement of another pending accolade, defends his father’s work and remains adamant that his father deservers recognition. At the same time Eliezer is criticizing younger generations of scholars, including his own son. 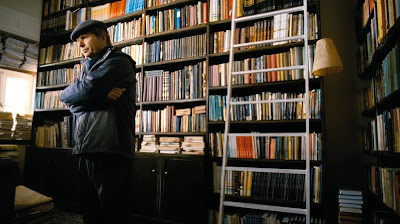 The acting from the two leads is excellent, though it would have been nice to see a little more emotion from Bar Aba, who is quite one note at times. Heightened by a well-conceived score, Footnote has an energetic pace and light mood, playing around with on-screen graphics and other cutesy, but whimsy techniques, choosing to introduce the characters via a checklist of interesting ‘things to know’. The humour works well, with Uriel wandering around his campus in a robe and then fencing uniform, after his clothes are stolen from the gym at one point.
Our opinions of both men alter throughout the film; and when Eliezer finally gets wind that there is something fishy – utilizing his intuition and keen analytical skills – it results in one of the film’s second half highlights. Despite my knowledge of Talmudic literature being non-existent prior to watching this film, Footnote entertainingly addresses themes that are larger than this - father/son rivalries and relationships, the merits of dedicating ones life to an academic field – and is effective enough as a character study to justify its place in the Foreign Language shortlist. Footnote is destined to have a very limited release here in Australia, but it is well worth seeking out a viewing.
My Rating: ★★★1/2 (B)
Posted by Andy Buckle at 1:02 AM