The Avengers, the superhero film to end all superhero films, produced by Marvel Studios, and distributed by Walt Disney Pictures, has a scheduled release in Australia on April 25, and a U.S release on May 4. Written and Directed by Joss Whedon (Buffy, Serenity), and featuring a stellar creative team, The Avengers is the sixth installment in the Marvel Cinematic Universe. Though most sessions will be screened in post-production converted 3D, I saw the film in 2D so at this point I can’t comment on its success in 3D. 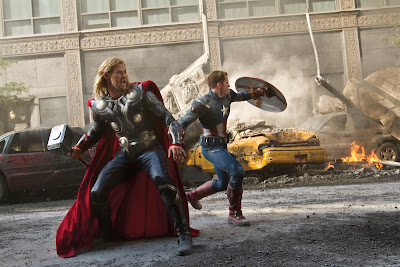 Ever since Nick Fury (Samuel L. Jackson) appeared at the end of Iron Man (2008) and mentioned the Avengers Initiative, fans have been patiently anticipating the arrival of the adaptation of the Marvel comic book series, first published in 1963, which utilizes all of their favourite characters side by side. What is interesting, and it is apparent, is that Whedon has not utilized the Avengers comic books as the sole point of origin here, but elements of what have come before in the preceding films of the Marvel Cinematic Universe. So, while it is not imperative to have seen each of the lead up films, they will aid your understanding of the relationships between the characters and how they all fit into the Initiative. The Avengers has been hyped as one of the biggest movie events of 2012, and I am very pleased to say that it is one of the best blockbusters - in terms of story, character, visual spectacle and entertainment value - to grace our screens in some time.

Since Iron Man back in 2008, The Incredible Hulk, Iron Man 2, Thor and Captain America, have all been released (to positive receptions, though Iron Man is still arguably the best). The stories of the eponymous superheroes have all led toward their involvement in The Avengers. Iron Man 2 introduced Black Widow and ended with a shot of Thor’s Hammer for example, while Captain America and Iron Man were linked by the involvement of Tony Stark’s father. Loki, who emerges as the primary villain, beset on unleashing an army on Earth, is Thor’s brother. The only actor not reprising his role in this film is Edward Norton, who portrayed Bruce Banner in The Incredible Hulk (2008). Mark Ruffalo replaces him here. 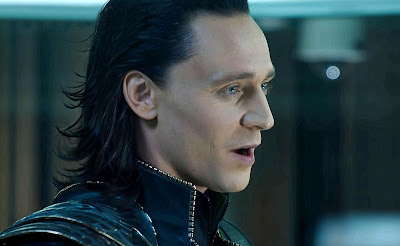 In the opening sequence of The Avengers, Loki (Tom Hiddleston), having been banished from Asgard at the conclusion of Thor, makes a deal with an alien race of warriors beset on ruling Earth. Via a constructed portal, he steals the heavily guarded Tesseract, a Cosmic Cube capable of supplying its owner with unlimited power, from American Peacekeeping unit, S.H.I.E.L.D. Eric Selvig (Stellan Skarsgard, reprising his role from Thor), enlisted as chief Tesseract researcher, and one of S.H.I.E.L.D’s operatives, Clint Barton/Hawkeye (Jeremy Renner) are possessed by the power of Loki’s staff and become his minions as Loki attempts to harness the power of the cube to open a portal between worlds, so that his awaiting army can enter.
Recognising the threat of the Tesseract in the hands of Loki, Nick Fury, director of S.H.I.E.L.D, with the help of Agent Natasha Romanoff/Black Widow (Scarlett Johansson), Agent Phil Coulson (Clark Gregg) and Agent Maria Hill (Cobie Smulders) recruits Thor (Chris Hemsworth), Steve Rogers/Captain America (Chris Evans), Tony Stark/Iron Man (Robert Downey Jr.) and Dr. Bruce Banner/Hulk (Mark Ruffalo) from around the globe, to come together in a united fight against their powerful new foe.
Where The Avengers surprised me was the way that these rich characters, which have all been introduced and developed in their own films, are taken even further here. They are all given interesting arcs and individual time to shine. This was a concern of mine. They are all flawed in their own way, as both humans and superheroes (which is important), and assuming they will all be able to work together is a big risk, taken by both Nick Fury within the film, and on a cinematic level by Marvel Studios and Joss Whedon. 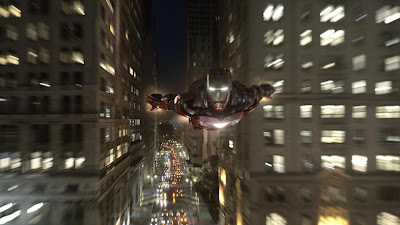 Realistically, it does take the team some times to form a concrete alliance. Knowing that there would be a lot of characters sharing the screen, including some characters we know very little about (Hawkeye, Black Widow and Nick Fury), Whedon's script has pulled it off brilliantly. The film, full of epic action and visual spectacle, actually feels character-driven. Loki’s motivations are made clear, while the Avengers are all forced to overcome personal conflicts and their own limitations – none more so than Banner, who at one point presents more of a threat to the safety of the team than Loki himself.
A lot of the film’s tension comes from between the team. Rogers’ no-nonsense attitude and immediate tendency to lead is a big part of who he is, but Stark opposes his leadership and continually frustrates Rogers with his arrogance. What makes him interesting is that he is trying to come to terms with an unfamiliar modern world, having spent decades frozen in ice. Romanoff is dismayed by the loss of Barton to Loki while Thor is divided because he has unfinished business with his brother. Nick Fury is met with distrust from the team after they discover an ulterior motive in S.H.I.E.L.D’s research of the Tesseract. 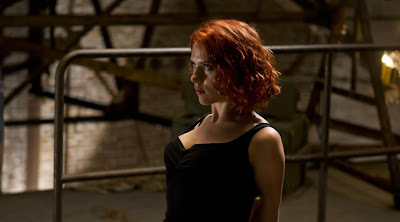 The performances are all better than they needed to be too. We know that Downey Jr., Evans and Hemsworth were all perfectly cast in their roles and gave great performances in their individual films, but they continue that strong work here. Downey Jr. is wonderfully over the top. Ruffalo, who keeps Banner’s awkward struggle to repress his emotions consistent throughout the film, is always solid, but the one I was most impressed by was Scarlett Johansson. This is one of her best performances. The excellent Tom Hiddleston is also the right blend of clever, smarmy and merciless – a genuinely fearsome and unpredictable villain.
The scale of the film is enormous, and this is something that Joss Whedon has proven in the past with his fantastic show Firefly. After an exciting opening car chase sequence, and a scene of destruction that has to be seen to believe, there is a huge action set piece aboard a flying vessel. The film climaxes in a tremendous struggle staged beneath Stark Tower in downtown Manhattan. I didn't think it could get any better. These set pieces are truly spectacular and display impressive use of the very-entitled mammoth budget. There isn't a cent wasted here, and this is a testament to the studio.
There are times where the team is fighting together, but often they are paired up or fighting individually. There are several lengthy shots that link the individual battles, seamlessly maneuvering from the ground to the air. Seamus McCarvey (Atonement) is the DOP, so not only are the action sequences well staged, but expertly captured. The visual effects (from a team made up of Oscar winners, some of whom worked on the two Iron Man films) are awe-inspiring and outdo almost everything that has preceded it. 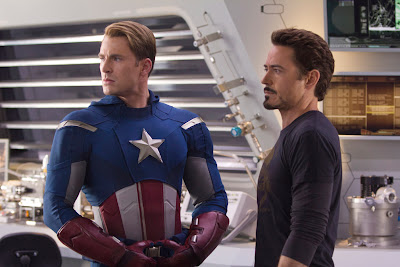 While a couple of clunky early sequences don’t quite hit the mark – purely because they are exposition and set up for the unacquainted - I found there to be little to criticize. One has no desire to search for criticism either, because the entire experience is so much fun. The blend of jaw-dropping action and visual effects, a compelling story, an excellent villain and richly layered, likeable characters makes The Avengers, unexpectedly, not just high quality popcorn entertainment, but extraordinarily satisfying cinema.
The Avengers balances genuine tension and stakes, with a cartoonish atmosphere and clever, self-aware humour. The film is consistently very funny. Stark’s arrogant antics might prove to be grating for some but I personally found him very entertaining. In short: The Avengers is a geek fest sure to please die-hard fans, but it transcends the genre and is sure to be enjoyed by just about anybody. It is the finest instalment in the Marvel Cinematic Universe, and one of the best superhero film I have seen to date, and once it hits cinemas next week, I’ll be very eager to check it out again.