This sweet and heartwarming story focuses on Kiki, a witch who has just celebrated her thirteenth birthday. As per tradition, Kiki has reached the age when witches must leave their families for a year and make a new home for themselves to commence their training, and search for their special skill. 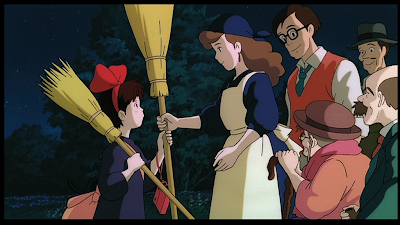 With the arrival of the full moon prompting Kiki’s unwavering enthusiasm to leave, she sets off at midnight on her mother’s broom, dissuaded from using a smaller one she had made herself, with her most loyal companion, her talking cat Jiji. Her mother is the local alchemist, having arrived in the town when she was thirteen. After coming-to-terms with flying, and surviving several scrapes – a storm and an impromptu landing in a train car, where they spend the night – the two land in the picturesque and densely populated seaside town of Koriko.
Kiki makes a rough start, mostly through her own insecurities, discovering that she is different and not exactly welcomed in Koriko. Soon she befriends a kind and pregnant baker named Osono, who offers her a room in the attic, a job at the bakery and a means to open her desired business – a flying delivery service. Kiki can utilize her broom skills and so begins a number of misadventures for the young heroine. 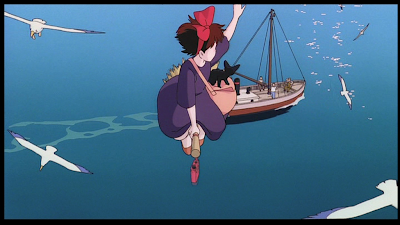 Along the way Kiki meets an elderly woman and while waiting for the pie she was hired to deliver to cook, she completes jobs for her around the house, and a young artist named Ursula who lives alone in the woods. When Kiki mysteriously loses her powers one day (she can no longer control her broom or converse with Jiji) she receives much-needed guidance from Ursula about overcoming what she diagnoses as ‘artist’s block’.
Kiki also befriends a goofy, bespectacled young boy named Tombo, who has a keen interest in aviation and an even greater interest in Kiki. Having regained her flying ability, she becomes his savior in the spectacular climax. He is trapped hanging on to the dirigible has been stationed in town, which during a destructive windstorm is blown into the air once the bonds keeping it grounded are destroyed. 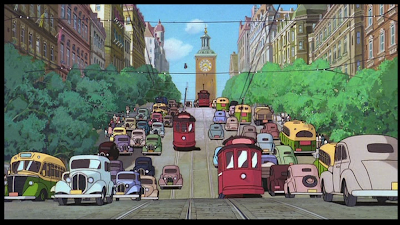 True to Miyazaki’s films, Kiki’s Delivery Service opens up quickly and within only a few minutes, Kiki has already been plucked from her ordinary life and plunged into a life-changing adventure. Once she arrives in Koriko, the film’s pace slows down, but for a patient viewer, there is plenty of reward, often solely in the visuals. The film is a delight for all ages, but especially children. Kiki is a sweet and endearing character, and Jiji is an entertaining sidekick. His droll reactions to Kiki’s clumsiness and consistent wisecracks produce plenty of laughs. 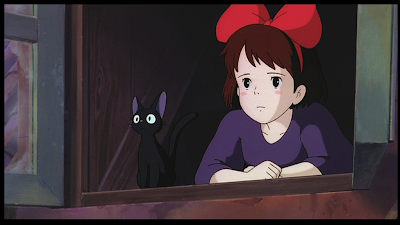 What is interesting about this film is that it doesn’t feature any real villains, but is full of friendly characters that we come to like. The film’s drama emerges from Kiki’s personal development, and rarely from antagonistic external forces, as she comes to terms with new responsibilities and faces challenging obstacles. We simply follow Kiki as she embarks on her quest, and are acquainted with the characters that Kiki meets along the way who each teach her something new. 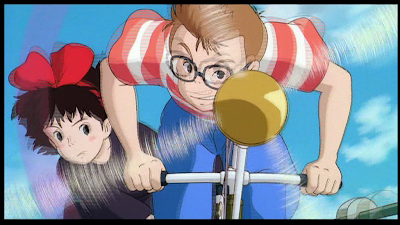 Miyazaki has claimed that Kiki’s Delivery Service “touches on the gulf that exists between independence and reliance in Japanese teenage girls”. It is about discovering how to be self-reliant, and the mix of hard work and luck that impacts the journey. It is a fantastic coming-of-age film that chronicles the initiation of a young girl into adulthood, and though Kiki is a witch, it is not just about her harnessing her unique powers, but it is about her personal development as a young woman as a result of her independent experiences, the decisions she makes for herself and the lasting bonds she forms with the people she meets. It deals sensitively with issues associated with friendships and learning how to trust other people and the merits of willingly helping others. 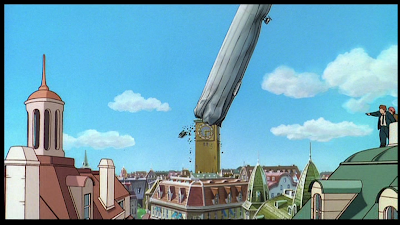 As expected, the highlight of Kiki’s Delivery Service is the evocative visual beauty of the animation, and the wonderful detail that has gone into the intricate construction of Koriko, especially. The captures of Kiki in flight with the details of the town still visible beneath her are incredible. Her hair and her robe are billowing in the wind, and Jiji is grasping her bag for dear life. Special mention must go to Joe Hisaishi’s beautiful score. There is a lovely subtlety to the music, which accompanies the film’s sweetness with gentle, pleasant harmonies.
Kiki’s Delivery Service is a lovely film and exceptionally pleasant viewing, and by crafting a character as endearing as Kiki, Miyazaki has produced a fantastic role model for young girls. It is yet another masterpiece in the Miyazaki resume and should serve as the perfect companion picture to My Neighbor Totoro, which I will be looking at next in my Ghibli marathon.
Posted by Andy Buckle at 3:50 PM