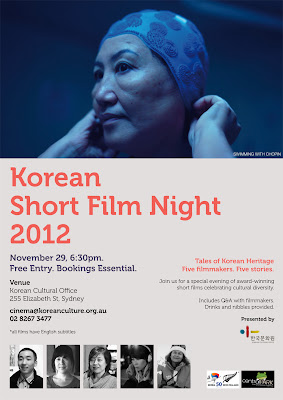 A night of celebration will grace the Korean Cultural Office as a selection of award-winning short films screen as part of The Korean Short Film Night 2012, which aims to celebrate cultural diversity. Tales of Korean heritage features films from Australia, New Zealand, South Korea and the United States that focus on Korean heritage and stories in a newfound land.


Directors Andrew Lee (UTS) and Susan Kim Danta (School of Media Arts, COFA) will be in attendance for a Q + A after the screening.

A mix of drama and documentaries will warm your hearts with their moving storylines and genuine characters. The event will also mark the closing of the New Zealand and Korea Year of Friendship, as the Australian premiere of KOWI screens.

The event is presented by the Korean Cultural Office and run by Cinema On The Park, a free, weekly Korean film night, which boasts a full line-up of the best of Korean cinema from controversial classics to popular Korean blockbusters. Having attended several of these screenings I can recommend coming along, both to this event, and future screenings.
Posted by Andy Buckle at 3:50 PM