New Release Review: The Perks of Being A Wallflower (Stephen Chbosky, 2012)

The wonderful Perks of Being A Wallflower, one of the finest films I have seen about the challenges of adolescence and the life of a high schooler, felt from a deeply personal place. The reason for this might be that the fact that writer/director Stephen Chbosky has adapted the film from his 1999 novel – and has been responsible for every chapter of the film’s journey from the page to the screen. Though I having not the epistolary novel (comprised of a series of “letters”), Chbosky’s love for these characters is clearly evident. 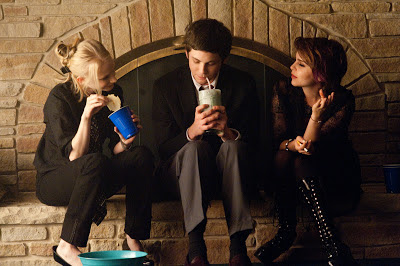 The Perks of Being A Wallflower follows Charlie (Logan Lerman, Percy Jackson and the Lightning Thief), a young man anxious about his freshman year at a new school. As is revealed throughout Charlie has suffered a series of traumas in his life, and is emotionally and mentally scarred as a result. Bright but incredibly shy, Charlie finds himself accepted amongst a group of sympathetic, free-spirited seniors, including a stepbrother and sister, Patrick (Ezra Miller, We Need to Talk About Kevin) and Sam (Emma Watson, Harry Potter), who offer up new experiences and guide him through the emotional rollercoaster of adolescence.

There are many examples of novelists struggling to bring their own material to a different medium (even when solely adapting the screenplay) but Chbosky has got it right on every level. This is Charlie’s story and we are immediately immersed into his headspace through the use of personal voice-over narration, but we also understand – through the vivid flashbacks to his past and thoughtful POV shots – exactly how he is feeling and the challenges he is facing.

Chbosky has also created an atmosphere that is definitively the technology sparse 90’s – the prevalence of records and mix tapes as romantic gifts and the inspired music choices (The Smiths, David Bowie, Cocteau Twins, Sonic Youth – what a soundtrack!) accompany the era perfectly. It was a time when it was difficult to locate a song you had heard on the radio if you didn’t know the title or the artist, and youngsters had no other means to tell each other how they felt apart from potentially awkward face-to-face conversations. Thinking back to that time – and even though I was a few years younger than Charlie was – evokes mixed feelings of nostalgia.

This is not a perfect film, but there are few things worth criticising. A couple of sequences, notably those where Charlie is taunted by some of his classmates, feel clunky and lack the authenticity that Chbosky manages to consistently capture, and some of the dialogue is a little hit-and-miss. Miller, in particular, has some funny one-liners and the dreamy look of the party sequences is a technique I found effective. 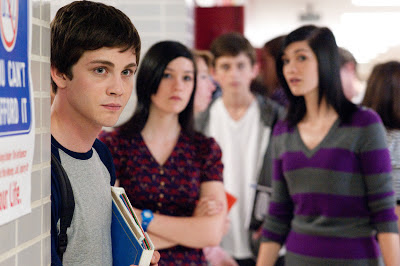 The performances from the talented young cast are exceptional. Watson, now in the post-Hermoine years, continues to mature. Though underused in My Week With Marilyn, she was perfectly suited to this role. Sam has insecurities, and her former promiscuities have resulted in her regretting her wild early years of high school. Though it is clear she continues to make dating mistakes – but with a more mature awareness - she is dedicated to making it into her desired college.

Miller, having already made a big name for himself after impressive work in City Island and Kevin, is a scene-stealer. In an about turn to the teenage psychopath of the latter film, Miller creates a giddy and unpredictable character. Tall, gangly and openly flamboyant – and not perturbed by his schoolmates mocking – Patrick possesses an enviable amount of energy, and not to mention honesty and wisdom beyond his years. Like both Sam and Charlie, he has a tormented past, and his own sub-story is heartbreaking.

Then there’s Lerman, who is a revelation. His sure-footing here is astonishing. Charlie is easily likeable and endearing - a genuinely nice kid - but Lerman also brilliantly captures Charlie’s insecurities and his floundering nerves when faced with scary new experiences. As we watch his confidence increase, Lerman’s charm results in evoking silent applause.

The supports also include some inspired casting. Mae Whitman, perhaps best known for her role as Anne Veal in Arrested Development, has some significant screen time as a quirky goth with an eye for Charlie and Paul Rudd is fantastic, creating one of the kindest and most encouraging English teachers you will ever meet. Though I had one excellent high school English teacher, Mr. Anderson is the teacher you wish you had teaching you about To Kill A Mockingbird and The Catcher in the Rye.

While there are some very amusing moments – Charlie’s quaff of a ‘special’ brownie and the students’ involvement in a production of The Rocky Horror Picture Show are a couple of examples – there are more than half a dozen that are so scarily relatable and moving that they will leave you on the verge of tears. While one may relish in the nostalgia, and wish that they could return to those memorable high school parties, or listen to Bowie’s ‘Heroes’ for the first time again, there are a number of poignant themes – bullying, sexual abuse, prejudice against sexual orientation and teen suicide – that build drama between the characters, but also shape who they are. They account for what has wounded and scarred them in the past and the lingering obstacles they are still trying to overcome.

With some dark subplots that originally resulted in the novel to garner controversy, this is not your typical glamorous teen drama. We grow to care about these characters, and as a result the repercussions of the film’s serious themes hit hard. With a pumping soundtrack, which may result in a spontaneous post-view purchase, and eye-opening performances, this is a genuine and sincere portrait of friendship and embracing who you are and the trials and tribulations of a bygone era of high school life.