The Angels' Share, a tale of whiskey espionage from respected British director Ken Loach (The Wind That Shakes The Barley), screened at the 2012 Cannes Film Festival (extraordinarily, it is Loach's eleventh film accepted) and picked up the coveted Jury Prize. 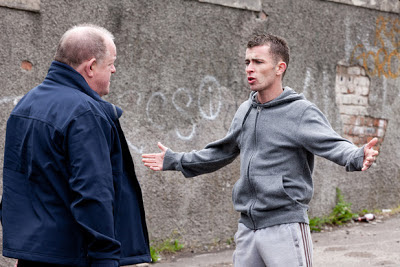 It is an edgy, though heartfelt, redemption story about a troubled and violent Glaswegian youth, Robbie (Paul Brannigan), who has one chance, with a baby on the way, to turn himself around, learn to be responsible and establish a route to a new life. Balancing the effective drama with a clever dose of comedy in the vein of The Full Monty, it is often uproariously funny. But both the poignant drama and the laughs are engrained in a real human story and that's what results in the film having more of a profound effect than one would expect.

Struggling to stay out of the way of his local tormentors and being aggressively told to keep away from the mother of his newborn child, Robbie is facing a crossroads. He could leave town (as recommended) and start afresh, or he could prove that he deserves a second chance and has the ability to change. While on community service, a bizarre series of events leads to him attending a whiskey tasting session in Edinburgh with his community supervisor, Harry (John Henshaw), and it is there that he discovers an unlikely hidden talent - a fine nose for whiskey. He enlists a few of his buddies (local misfits charged with minor misdemeanours), when they learn about a priceless whiskey set for prompt auction, to help him utilise his talent to their economical advantage.

There is some really strong comedy, and though Robbie is a loser who is hard to sympathize with initially, he eventually wins us over. The support cast are all hilarious. One of the few issues for me personally were the Scottish accents, which were so thick that it was difficult to understand what was being said at times, and I definitely missed a few of the jokes. Viewers should be aware that there is some strong profanity and grisly violence, but The Angels' Share is a potential feel-good hit that should thrive on positive word-of-mouth.
My Rating: ★★★★ (B+)
Posted by Andy Buckle at 6:46 PM