James Bond is back for another adventure in the 23rd installment of the popular spy franchise. Oscar winning British director, Sam Mendes (American Beauty, Road to Perdition), is the man at the helm for Skyfall, the third feature starring Daniel Craig as 007. 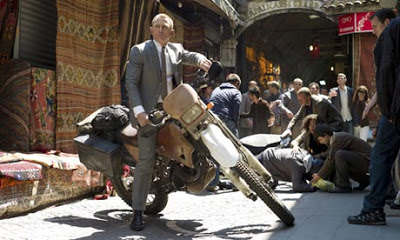 A figure from M’s (Dame Judi Dench) past – a rouge agent named Raoul Silva (Javier Bardem) – resurfaces and targets MI6. Bond (Craig) with the assistance of his new Quartermaster (Ben Wishaw) traverses the globe in his attempts to take down this dangerous new threat.

Admirably, Mendes and his Academy Award-nominated cinematographer Roger Deakins (No Country For Old Men, True Grit) ensure that the film’s locations and epic set pieces look absolutely stunning. The framing and compositions are beautiful and the colours explode off the screen. The steady, controlled action sequences in Skyfall prove that it is possible to create frenetic thrills and still ensure that the audience can see it. Though the action was about the only feature worthy of praise in Quantum of Solace, the Bourne-esque shaky cam and rapid-fire editing was an aesthetic that needed to go.


Continue reading at Graffiti With Punctuation.
Posted by Andy Buckle at 12:36 PM