Rust and Bone screened at the Canberra International Film Festival. It was the Australian premiere.

The brutish Ali (Matthias Schoenaerts, Bullhead) – all testosterone, arms, fists and brash physicality – has just taken his son away from his irresponsible mother and has travelled a long distance to start a new life. 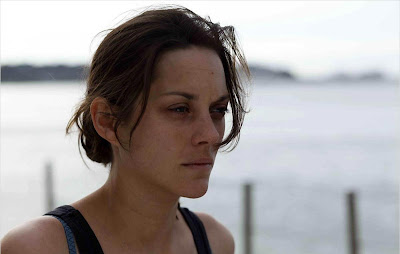 After some minimalist living, they eventually shack up with his sister and Ali takes on whatever jobs he can find. He works security at an electronics store, bounces at nightclubs and because of his fearless lease of life, takes up bare knuckle boxing when a work colleague, who runs an illegal racket, poaches him. He frustrates his sister and utilises tough love on his son, whom he often neglects.

It is at a nightclub that he meets another social misfit, Stephanie (Marion Cotillard, La vie en rose), an orca trainer and choreographer of a local sea world show. Having been assaulted by a male club patron, Ali escorts her home. Not long after, Stephanie suffers a horrific accident and turns to Ali for strength, company and care.


Continue reading at Graffiti With Punctuation.
Posted by Andy Buckle at 12:40 AM