It is a bit of a mixed week this week. When I read that The Master, The Sessions and Seven Psychopaths were being released on the same day I was very excited. Having been disappointed by Seven Psychopaths and having heard terrible things about Alex Cross (also released) it has weakened somewhat. Still, The Sessions has been very well received, and The Master, for me (and many others), is one of the best films released this year. 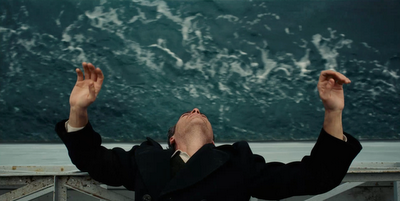 The Master - the highly anticipated new film from ambitious American writer, co-producer and director, Paul Thomas Anderson (Boogie Nights, Magnolia and There Will Be Blood). A grandiose achievement in almost every sense, this evocative work of vibrant cinematic vision is a film that will offer rewards for inquisitive film goers for a long time to come. Not easily forgotten, it is a dark and haunting storm that stirs emotions, offers up individual moments that will leave a viewer in awe and through its explored themes, leaves a percolating concoction of contemplation and admiration. At the fore of this story is Freddie Quell (Joaquin Phoenix in his first screen role since I’m Still Here), a World War II Navy veteran who is struggling to adjust to a post-war society. A gaunt, sickly-looking alcoholic with a bent back and a limp, emotionally and physically Freddie is a mess. He bounces between jobs – a portrait photographer and a vegetable farmer – and is consistently under the influence of toxic concoctions that are clearly unsafe to drink. He then stumbles onto a pleasure boat in San Francisco where he meets Lancaster Dodd (Phillip Seymour Hoffman) the leader (‘master’) of a philosophical movement known as The Cause. He sees something in Freddie, perhaps recognizing himself and relating to his personal struggles, and after accepting him into the movement as a patient and disciple, begins to exert his influence.

The Sessions -  Based on the poignantly optimistic autobiographical writings of California-based journalist and poet Mark O'Brien, The Sessions tells the story of a man confined to an iron lung who is determined - at age 38 - to lose his virginity. With the help of his therapists and the guidance of his priest, he sets out to make his dream a reality. Stars John Hawkes and Helen Hunt have been mentioned in the Oscar talks for their performances, and Hawkes has been great of late (everyone, he should have been nominated for Martha Marcy May Marlene last year following Winter's Bone the year before, yes?). Check out Chris Elena's review for An Online Universe at the link.

Alex Cross - follows the young homicide detective/psychologist (Tyler Perry), from the worldwide best-selling novels by James Patterson, as he meets his match in a serial killer (Matthew Fox). The two face off in a high-stakes game of cat and mouse, but when the mission gets personal, Cross is pushed to the edge of his moral and psychological limits in this 'generally poorly received' action thriller.

Seven Psychopaths - Marty (Farrell) is a struggling writer who dreams of finishing his screenplay, "Seven Psychopaths". Billy (Rockwell) is Marty's best friend, an unemployed actor and part time dog thief, who wants to help Marty by any means necessary. All he needs is a little focus and inspiration. Hans (Walken) is Billy's partner in crime. A religious man with a violent past. Charlie (Harrelson) is the psychopathetic gangster whose beloved dog, Billy and Hans have just stolen. Charlie's unpredictable, extremely violent and wouldn't think twice about killing anyone or anything associated with the theft. Marty is going to get all the focus and inspiration he needs, just as long as he lives to tell the tale.


Weekly Recommendation: The Master. Definitely, I really want to see it projected in 70mm (Hayden Orpheum Cremorne only - Sydney) so if you get the chance I think that would be very worthwhile. It is going to look amazing anywhere, however. From what I have heard The Sessions is also going to be a very worthwhile watch. If you haven't had the chance to see Argo, The Intouchables or Frankenweenie yet, they also come highly recommended and continue their run this week.
Posted by Andy Buckle at 1:53 PM