The final chapter of the Twilight Saga arrived in cinemas this week, accompanied by the usual opening weekend mass flock. Bill Condon returns to direct the second half of the screen adaptation of Stephenie Meyer’s final novel in the series, Breaking Dawn. 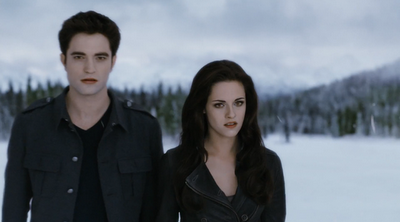 As expected, the events kick off straight after the conclusion of Part 1 with newly transformed vampire, Bella (Kristen Stewart), recovering and trying to adjust to her new set of skills and desires. Her baby, Renesmee, is healthy and growing fast, protected and cared for by Jacob (Taylor Lautner), who “imprinted” her and as a result is bound to her side. Bella and Edward (Robert Pattinson) are living with the Cullens, Edward’s family, who have welcomed Bella and Renesmee into their clan.

Though she ages fast and is the spawn of a vampire and a human, Renesmee was conceived and delivered while Bella was still in human form, and is not the immortal child (an illegal infant created by two vampires) as the ruling Volturi (led by Michael Sheen and Dakota Fanning) are led to believe. Fearing the worst the Cullen clan gather allies from around the world who can attest to Renesmee’s human qualities and stop a war.

There are many problems with Part 2 on both an entertainment level (which is something that Part 1 even managed to deliver) and a filmmaking level. We have the myriad of minor characters who are introduced with the intention of playing a key role (Alistair, a reluctant colleague, is one) and are then sort-of explored and completely forgotten about, and the distracting inclusion of green screen and the abysmal CGI (especially the technology used to render the age and appearance of Renesmee). For a franchise that has made as much money as this has, it is still surprising to see such sub-par visuals (though the wolves looked much better here than in Part 1).

We also have the introduction of potentially interesting ideas that fail to be explored. Bella’s struggle to control her newfound urges and come to terms with her strengths could have been one - but she has the former under wraps in mere minutes, and in utterly ridiculous fashion, and the latter is conveyed through a dumb montage that has Bella winning an arm wrestle and punching apart a boulder. There are many wasted opportunities to actually explore features of vampire lore in any real depth. But that’s not what the target audience is here for, its about the romance of watching this formerly normal young girl fight for everything she has been privileged to – even if it is a husband who has become useless since becoming a father (he’s just ‘there’ for most of the film), a creepy looking child and a ridiculously over lit house.

The wooden acting (but to be honest, Stewart and Lautner have certainly been worse) and awful dialogue has always been a distinct feature of this franchise. It is Pattinson who gets the raw deal here. The joke is on him and he spends most of the time at Bella’s hip with a cheeky grin on his face that feels dangerously close to ruining the take.

But where Part 2 really suffers is in its narrative, or lack thereof. This is an immensely boring film. There is no dramatic impact or mounting tension, despite the feeling that we are headed for an inevitable conflict, and several claims that joining the Cullens was an extremely dangerous decision.

For 100 minutes we literally watch nothing interesting happen. A lengthy recruitment drive takes up a large portion of time, and the rest is spent introducing exposition to unsubtly explain everything and lengthy exchanges that feature little more than the characters standing around and smiling at one another. While Part 1 featured what surely be the most boring wedding ever filmed, this one features the most prolonged pre-battle. The two sides are standing hundreds of yards apart, yet talk in a normal tone and when Edward is summoned to approach the Volturi we feel like we watch every one of his steps there.

I didn't so much as hate Breaking Dawn Part 2, though the fact that it is more dreadful than its predecessor evokes stunned disbelief, but found it a near-insufferable bore. This is not a film made for me, I get it, but fans 'may' be satisfied. I feel like the big events - the marriage, the baby, Bella’s transformation and the final battle - are individually significant and probably quite engaging in the novels, but with the story barely possessing a pulse in between these events, the material feels stretched thin. Even when the climactic battle does come, and it is probably the most exciting part of any of the films, what follows is sure to disappoint anyone unacquainted with the novels. This was the least satisfying of my Twilight experiences by a substantial margin. There is no justification, beyond money, to split this final book into two films. Ultimately, I am just thankful this toxic franchise is over.