New to cinemas this week we have the newest (and final...i think) installment in the Twilight Saga, Breaking Dawn Part 2. Now, if I wasn't researching what was out this week I never would have known this was out. There has been absolutely no publicity (not that there needs to be), but there is a really bizarre atmosphere surrounding the release. 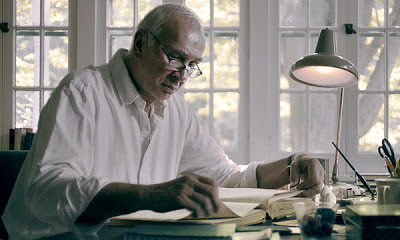 Also out this week are Dead Europe, the haunting adaptation of the acclaimed novel by Christos Tsiolkas and The Angels' Share, Ken Loach's crowd-pleasing Cannes winner, both of which I have seen, as well as Robot and Frank, Two Little Boys and God Bless America.

Dead Europe - Australia's Tony Krawitz (Jewboy, The Tall Man) directs the adaptation of The Slap author Christos Tsiolkas' award-winning novel in this searing film about history, guilt and secrets. Ewen Leslie delivers a great performance as photographer Isaac, whose father's death in suburban Sydney reveals the schism in his family and prompts a return to the ancestral homeland. On a trip to his parent's village in Greece, he learns something of his father's cursed history. At first he dismisses the revelation as superstitious nonsense, but over the course of his travels - from Greece to Paris to Budapest - Isaac is forced to confront the anti-Semitism of the past, the embedded bigotry in the bones of Europe and the nature of inherited guilt. It is on this fateful trip that Isaac will learn the truth of his family's migration to Australia, their refusal to ever return to Greece, and the burden he continues to bear as a consequence of acts committed years before his birth. Krawitz sensitively depicts this clash of mythology and a very contemporary reality in this daring and enigmatic film populated by spirits and outcasts.

The Angels' Share - The Angels' Share introduces Robbie, an ex-offender and new father who embarks on an adventure with his new found friends to a whiskey distillery and discovers that turning to drink might just change his life.

Robot and Frank - Set in the near future, Frank (Frank Langella), a retired cat burglar, has two grown kids who are concerned he can no longer live alone. They are tempted to place him in a nursing home until Frank's son chooses a different option: against the old man's wishes, he buys Frank a walking, talking humanoid robot programmed to improve his physical and mental health. What follows is an often hilarious and somewhat heartbreaking story about finding friends and family in the most unexpected places.

Two Little Boys - When Nige finds himself in a spot of bother after a series of unfortunate incidents, he is forced to ask Deano for help. The problem is Deano is not really the kind of guy you should turn to in a crisis.

God Bless America - Frank (Joel Murray) has had enough of the downward spiral of American culture. Divorced, recently fired, and possibly terminally ill, Frank truly has nothing left to live for. But instead of taking his own life, he buys a gun and decides to take out his frustration on the cruelest, stupidest, most intolerant people he can imagine -- starting with some particularly odious reality television stars. Frank finds an unusual accomplice in a high-school student named Roxy (Tara Lynne Barr), who shares his sense of rage and disenfranchisement. Together they embark on a nationwide assault on our country's most irritating celebrities.

Weekly Recommendation: I have heard near-unanimous praise for Robot and Frank (and Frank Langella's performance) so I am going to blindly make it my top recommendation. The Angels' Share is very entertaining, and Dead Europe, though haunting and ugly, is worth a look too. Having also seen Two Little Boys and God Bless America I find them hard to recommend.
Posted by Andy Buckle at 7:51 PM