I watched Brick for the first time this week. I was impressed, especially by Joseph Gordon Levitt's performance. It was well-dialogued and gripping, if some of the developments were unrealistic, given the location and the age of the characters. 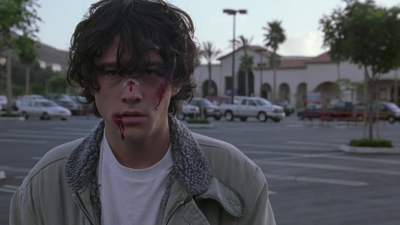 I also made a trip to the cinema to watch Frankenweenie. Great to see it in contention for an Oscar nomination for Animated Feature. It would be disappointing to see it miss out, because it is some of Burton's best work in a while. It looked stunning and is an effective balance of sweet, amusing and macabre, with some honorary nods to classic creature films. It even brought some tears to my eyes.

My review of Seven Psychopaths is now online at Graffiti With Punctuation. I am in the minority with my opinion on this one. It is out this week.

Later today, I will be posting a DVD review of Once Upon A Time In Anatolia on The Film Emporium, a film I appreciated much more on a re-watch.

Tomorrow I am seeing Two Little Boys and next weekend I am traveling to Canberra for the Canberra Film Fest. Like Someone In Love, Rust and Bone and Smashed are scheduled in. Then I am seeing Radiohead live and watching Skyfall, so there are lots of awesome things to look forward to. Just have to get through this week of work. Its been kicking my ass recently. Very busy.

So, enough about what I am up to. Here are some links:

Ruth shares her thoughts on The Master.

Sam has a new 'Best Films Set In...' feature. This time its Hotels

As part of his Horror Marathon, Alex looks at his Top 10 Scariest Non-Horror Films.

CS reviews A Fantastic Fear of Everything (starring Simon Pegg) at Toronto After Dark.

Nick asks us a question: What does the 'Nooooo' really represent?

Andrew's 'Essential Performances of the 90's' Tournament has come to an end. You can now check out the winner.

Tyler, like Alex, lists the 20 Scariest Films He Has Ever Seen.

And, if you are an Australian resident, be sure to enter the fantastic giveaway currently running at Graffiti. Find out how we are celebrating the 100th Anniversary of Universal Pictures.

Hope everyone has a great week.
Posted by Andy Buckle at 10:27 AM