Having never before seen Sidney Lumet's wonderful court room classic, 12 Angry Men, I thought I would watch it today in honour of the late director. What a powerful, provocative and inspiring film it is.

Confined for almost the entirety in one single room (there is a short sequence in an adjoining bathroom), with the period of deliberation equally sharing the running time, it remains captivating from start to finish. It tells the story of a jury of twelve men who are instructed to retire to the jury room and deliberate the guilt or innocence of the defendant, a young boy who allegedly stabbed his father. 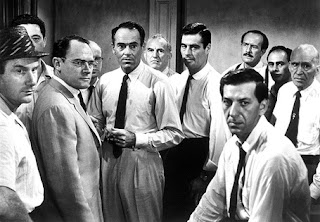 The case at first seems clear-cut, with the evidence strongly suggesting that the boy was guilty, but one man (Henry Fonda) opposes the other eleven jurors and declares that he believes it was not so simple. Angering some, but earning the respect of others, he then attempts to convince them that the boy could not be convicted on the basis that there was reasonable doubt to his guilt.

Tempers flair amidst the sweltering environment as these impatient and headstrong men verbally throw around their opinions, as the case is meticulously re-examined, and the evidence re-considered by Fonda's determined and unfazed protagonist. Sure enough, the votes begin to sway.

There was no requirement to even view the scenes from the courtroom. The way they are described and considered amongst the dialogued exchanges proves to be just as compelling. The screenplay is wonderful, the characters beautifully written and the performances from the fine cast are impeccable.

The lengthy and complex conversations are also beautifully captured by Lumet's sweeping camera, as it circles the room often capturing multiple individual conversations one after another. A culturally significant achievement, 12 Angry Men is an established classic and an incredible debut feature from one of America's most talented and respected filmmakers.