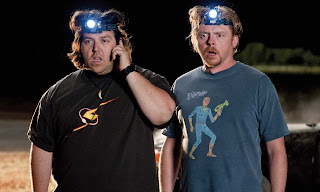 
Paul - Re-unites the comedy duo of Simon Pegg and Nick Frost (Shaun of the Dead and Hot Fuzz) but this time with director Greg Mottola (Superbad and Adventureland). Pegg and Frost star as two sci-fi geeks whose pilgrimage takes them to America's UFO heartland. It is here that they accidentally meet Paul (voiced by Seth Rogen), an Alien who has been hiding out in a military base for 60 years, and the unlikely trio embark on an insane road trip that takes them on the run from pursuing federal agents. This should be good fun. Written by Pegg and Frost, whose work in their aforementioned collaborations have been instant classics. Superbad certainly isn't unfunny either. The film to check out this week, without a doubt.

Scream 4 - The Scream franchise, which started back in 1996, make a return here, with horror master Wes Craven still at the helm. Sidney Prescott (Neve Campbell), now the author of a self-help book, returns home to Woodsboro on the last stop of her book tour. There she reconnects with family and old friends. Unfortunately Sidney's appearance also brings about the return of Ghostface, putting the entire town in danger once again. I haven't seen any of the Scream films properly, I think I watched the first half of the original once, so I'm going to give it a miss. But it will be a blast for horror fans.

Brighton Rock - The second film adaptation of Graham Greene's best selling novel starring Sam Riley (Control), Andrea Riseborough and Helen Mirren. The story chronicles a gang war raging through the underworld of Brighton. It charts the headlong fall of Pinkie, a razor-weilding disadvantaged teenager with a religious death wish. I have read 10 pages of the novel and so far it is quite good. I intend to finish it before I see the film. But I believe under the first-time direction of Rowan Joffe (the screenwriter of The American) the character relationships become convoluted and sloppy and the altered story is a mess.


Mars Needs Moms (RT: 35%) and Diary of a Wimpy Kid 2: Rodrick Rules (RT: 38%) are purely for the youngster these school holidays. I don't think either look particularly good. The former especially. I also thought that the first Diary of a Wimpy Kid film did terribly. This sequel seems unjustified.

This week's Recommendation: Paul
Posted by Andy Buckle at 10:42 AM