The Mirror, Andrei Tarkovsky's 1974 masterpiece, lacks a conventional or linear plot, which makes it difficult to describe or interpret. It works instead as a stream of consciousness rhythmically combining elements from three mirrored time periods, the pre-World War II time, the wartime itself and the postwar 1960's. Through the activity of the camera, The Mirror relays the thoughts of its narrator (Alexei) and the memories of the world surrounding him. The prewar sequences depict Alexei as a young boy, taken care of by his mother, while the latter sequences reveal Alexei as an older man, living apart from his wife and his young son. His own son is played by the same actor as the one who plays him when he is young, while Margarita Terekhova doubles as his mother and wife. We never actually see the older Alexei, though he communicates with his mother and his wife and son through a series of telephone conversations, which indirectly accompany the action. 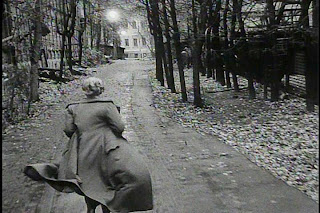 I have read that this is Tarkovsky's most autobiographical film as he draws from his personal childhood experiences; notably the evacuation from Moscow to the countryside, with most of the film shot within the interior or surrounding exterior of a country cottage, and that he also had a mother who worked as a proofreader during the war. The voice of Alexei isn't alone in narrating. The poems which filter throughout the film are actually written and spoken by Tarkovsky's father, Arseny Tarkovsky, while the newsreel footage that accompanies the dual stories is real footage from the war period. Much of the film can be realised as a stream of consciousness, with moments from the prewar period seamlessly combining with those from the post, often within the same scene, divided only by a sweeping camera movement or a cut. Haunting dreams and hallucinations also feature throughout. There is a shot near the conclusion of the film of Alexei on his death bed, so I took it all to be a series of memories, reminisces and considerations.

Every shot is perfectly constructed, with every movement of the camera calculated and precisely thought through. Like Andrei Rublev (1969), there is a dynamic and atmospheric quality to every scene that really holds your attention, and very often delivers something completely unexpected. Alternating between vivid colour and sepia, the cinematography is astounding, as are the array of haunting musical accompaniments. The burning barn shot is unforgettable. It opens inside the cottage and in one take snakes through the hall, pauses to capture the illuminated children watching the fire from the front door by way of a mirror, before jumping forward in time to see Alexei's brother (now older) emerge from behind the mirror and make his way out to examine the fire. The camera rounds the side of the house and reveals the extraordinary sight. The fire is blazing violently in the background, but the camera stops to include the rainwater dripping from the roof of the cottage in the foreground, which is a wonderful display of interaction between the natural elements. 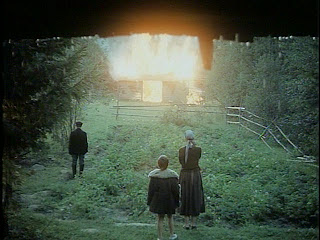 Personally, I loved the closing shot too. The last time the film features Alexei is on his death bed, but I saw the camera movement in the closing scene to be his final retreat from the story. Still existing in a spiritual form to track the memories of his mother (in both young and elderly form) the camera retreats into the woods, and the image fades to black. The other metaphorical references present throughout went over my head; actually I don't think I understood much at all. Perhaps that is the intention. Some of the dream sequences portray nature as a threatening presence and must have influenced Lars Von Trier in his making of Antichrist (2009). The most notable performance is Margarita Terekhova. With the most screen time, close-ups of her face are used by Tarkovsky as a mosaic of emotions. The Mirror is near-unfathomable, but certainly a marvel of contemporary Soviet filmmaking. I can't think of two films more different than Andrei Rublev and The Mirror. Having only watched these two, Tarkovsky is already one of my favourite directors and I'm now eagerly awaiting Solaris, Stalker and The Silence.