Having completed the first of two Andrei Tarkovsky films I plan to watch this week (the other being The Mirror), I am very satisfied to cross his 1966 film, Andrei Rublev, off my 'Must-See' list. What an enthralling but challenging journey it is. There is no question as to its consideration as one of the great cinematic works of art of all time. The 205 minute uncut version certainly requires a time investment but I can assure you, it's more than worth it. 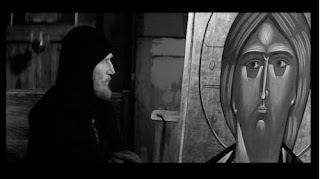 While my knowledge of 15th century Russia is limited at best, there is still so much happening in every frame to attract your undivided attention. The black-and-white cinematography for one, is absolutely stunning, and in nearly every episode of the story there is evidence to suggest that Tarkovsky is a technical genius. Andrei Rublev is full of memorable moments, notably the controversial Tatar raid sequence, whose carnage is relayed in great detail. Brutal violence, attempted rape and images of animal cruelty feature. Nearly every frame of the film is endowed with something special, whether it be grand sweeping camera movements or lengthy unedited dialogic exchanges. As an elaborate, richly detailed and complex cinematic masterpiece, Andrei Rublev is haunting, sensual, provocative and moving.

Andrei Rublev is set against the background of 15th Century Russia and is based loosely on the life of Andrei Rublev, the great 15th Century Russian icon painter. Tarkovsky shows the artist as a "world-historic figure" and "Christianity as an axiom for Russia's historical identity"during a turbulent period of Russian history that ultimately resulted in the Tsardom of Russia. The film concerns the relationship between man and God, man and nature, the artist and the people, the artist and the art form and the Russian and his land as a physical and mystical element. But as rich as Tarkovsky's film may be on a thematic level (originally made as a weapon against the Soviet regime, but faced forced censorship and cuts), it is a powerful mystery that chronicles humanity in the face of war, faith and love. It is also a film about artistic freedom and the possibility and necessity of making art for, and in the face of, a repressive authority and its hypocrisy, technology and empiricism. I can't wait to see more of Tarkovsky's films. Up next The Mirror, followed by Solaris and Stalker.