Never Let Me Go, the British screen adaptation of Kazuo Ishiguro's timeless 2005 science-fiction romance novel, is a mesmerizing film endowed with poignant beauty and tragic heartbreak that asks us to consider our own mortality, and what we value above all in our uncertain existence. Fueled by a wonderful central performance from Carey Mulligan, it is an unforgettable journey. Proclaimed the 'novel of the decade' by Time Magazine, Alex Garland's adapted screenplay was enough to attract its lead stars to the project back in 2009. Directed by Mark Romanek (One Hour Photo), Never Let Me Go was screened at the 2010 Toronto International Film Festival and opened the 54th London Film Festival, and has appeared on numerous critics' 'Top 10' lists from 2010. 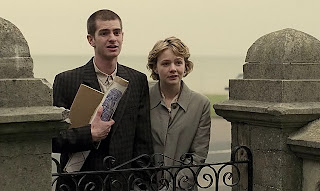 Never Let Me Go begins with onscreen captions explaining the existence of a medical breakthrough in 1952 that had enabled humanity to treat seriously injured or sick patients. This breakthrough had permitted the average human lifespan to be extended to about 100 years. The horrific means for this prolonged existence came about through the creation of scientific specimens (genetically modified clones) who are then raised under strict supervision throughout their limited existence. Once they reach a fully developed age, they begin a series of donations of their healthy organs, from which they will never survive (a fate they call 'completion'). The film is narrated beautifully by 28-year-old Kathy (Carey Mulligan) as she reminisces on her childhood experiences at Hailsham, her early adult life and her life-long friendships with Tommy and Ruth, portrayed as adults by Andrew Garfield and Keira Knightley.
The film is split into three parts, with the first depicting a young Kathy (Isobel Meikle-Small in a fine performance that uncannily resembles Carey herself) and her childhood at Hailsham, a seemingly ordinary English country boarding school. Kathy, along with her friends, the confident and popular Ruth, and the emotionally fragile and bullied Tommy, wear electronic wristbands, adhere to a strict regime of diet and exercise, and fear the grounds outside the walls. They are visited frequently by a wealthy gallery owner and encouraged to create pieces of art to feature in her exhibitions. They are also given tokens for good behavior, which they can use to buy personal trinkets, which look like they have been discarded from the world outside. It is subtly revealed that they are imprisoned inside the school grounds, not maliciously but because of the fate that has been assigned to them. They are made aware of this by one of their sympathetic teachers (Sally Hawkins) who quietly reveals that they will never reach an age to live a life that resembles a regular person or reach their full potential, and that they are destined only to provide their healthy organs to sick people. She is never seen again following that day. Despite Kathy's kindness and evident love for the often-neglected Tommy, he forms a relationship with the more sexually curious Ruth, who for years had teased him. Kathy is confused and heartbroken, but Ruth and Tommy stay together for their remaining years at Hailsham. Despite its quite reserved pacing, both the school sequences, and those that follow at the cottages, are quite swiftly wrapped up, relying on a series of short episodes. 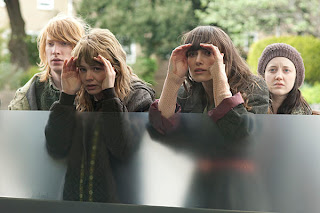 When the film shifts forward and the children are now teenagers, the three friends are rehoused in cottages on a rural farm. They are able to leave the property and explore the local towns, but they lack the social skills necessary to interact with regular people. They remained resigned to their eventual fate, viewing it as inevitable. Having become more aware of the status of their conception, they begin to seek out their 'Originals'. A trip into town to spot Ruth's potential Original causes unrest between the friends, and as Ruth and Tommy's relationship becomes sexual, a lonely Kathy volunteers to become a 'carer', a clone given a temporary reprieve from donation as a reward for supporting and comforting donors while they await and recuperate. Ten years pass since the friends see one another, but they are united when Kathy tracks down Ruth, who's health is suffering following her second donation. Having kept informed about Tommy's whereabouts, the two drive to meet him. Tommy, following his second donation is still coping well, and the three former friends take one final trip together; they reminisce about their past and Kathy and Tommy decide that only a brief time together is better than no time at all. The final 20 minutes of the film is quite upsetting, but to see Kathy and Tommy finally get together is an uplifting moment.
Carey Mulligan (whose performance in An Education should have been awarded the Oscar in 2009) is one of the most beautiful and talented young actresses working in the business. Her performance here in Never Let Me Go is magnificent, and the way she can effortlessly convey her emotions without having to say a single word, is incredible. The way she jealously looks and pities the way that Ruth touches Tommy, the visible love she has for Tommy when she looks at him, and her delight at his decision to accompany her for a walk, spring to mind. Kathy is the heart and soul of the film, delightfully providing the sincere narration and effectively conveying that she is in fact contemplating the cherished memories she has built, and not brimming with regret over her missed opportunities with Tommy. 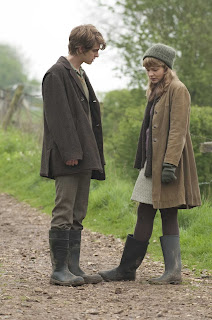 Andrew Garfield, another promising young performer who has been shot into the spotlight following acclaimed roles in Boy A and The Social Network, is once again very good as the simpleton Tommy torn between his loyalty to the suffocating Ruth, and the tender feelings he shares for Kathy. Crippled not only by his pending 'completion', but by his regret at not having acted on his feelings for Kathy, Tommy, once he finds a possible way to prolong his fate, enthusiastically pursues it. One of the most profound and moving sequences in the film is when Tommy and Ruth track down the Madame in an attempt to convince her that they are in love. His desperate attempts to prove to her, through his drawings, that his love for Kathy is strong enough to entitle them to an extended life together is inspirational and incredibly moving. His breakdown following this, when he finally accepts his fate, is shattering.
Keira Knighley, who recently has become one of my least favorite actresses, has not played a likable character in a long time, and it seems she is perfectly cast once again. Using Atonement as an example, Knightley has an unfortunate tendency to ruin films for me. I thought her performance her was quite good, but her character just so irritating that you begin to feel even more upset that Tommy and Kathy aren't together. Having not read the novel, though I think this will be a very rewarding read, I'm not sure whether she was written to be so maddening. Still, amongst the three central performances, she is massively overshadowed, especially during the scenes she shares with Carey Mulligan, who proves to be not only a more versatile performer, but just so much more appealing. 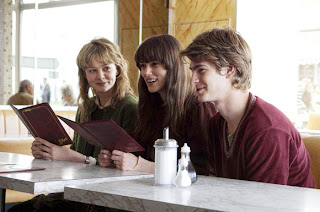 The score is fantastic throughout, and there are some gorgeous shots of the English countryside. The washed-out mood created in the early moments of the film develops an effective brooding atmosphere, that places these individuals in the real world, but also somewhat removed at the same time. Due to the depressing nature of the film, it's not one I will find myself watching too regularly, but it certainly resonated strongly with me. The key flaws, and these are minor, lie in the evidently shallow screenplay. I'm sure a much richer account of the world they live in, and the nature of their education and so on, can be found in the novel. But it still gives us all that it needs to. I believe in the novel, the true realisation of their fates is slowly revealed. Due to the opening captioned card, and the first sequence, we know that all we see culminates in this moment, which eliminates the possibility of surprise. As I expected, there were few. Never Let Me Go is a tremendously moving film experience, tackling some powerful themes and encouraging the audience to contemplate their existence. Do we truly pursue what we cherish most?
My Rating: 4 Stars (B+)
Posted by Andy Buckle at 10:54 PM