Zach Snyder's new film Sucker Punch, for many people, was one of the most anticipated films of 2011. As the man responsible for the exceptional re-make of Dawn of the Dead and the heavily-stylized 300 and Watchmen, lets just say his work has been hit-and-miss, despite the usual impressive dose of heightened visual escapism. Since its release, Sucker Punch has been met with nothing but energised loathing and heated criticism, stirring up everyone's expectations for this action-adventure that appeared from the trailer to predominantly include a number of scantily-clad young women wielding big guns against mythical creatures. It does sound like a dose of visceral mindless fun. Entering the cinema I was expecting something visually spectacular but with a severe case of missing-plot. Squirming uneasily throughout, both through frustration and boredom, the end result is certainly not fun, but a massively self-indulgent, overblown and pointless mess of a film that stands as one of the most despicable additions to the cinematic world in recent years. Its a film made for teenage boys who desire nothing more than to watch shit blowing up and to goggle at sexy women in revealing clothing. Every one else will witness millions of dollars go to waste on mindless effects, a gratuitous objectification of women, and a callously shallow film try and tag on an existential awakening in the final minutes in one last dire attempt to be an source of inspiration. Needless to say, I hated Sucker Punch. 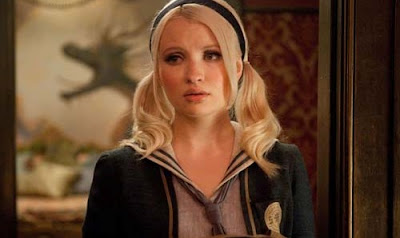 The slim plot follows a 16-year-old girl; nicknamed 'Babydoll' (Emily Browning). Blamed for the death of her younger sister, who is killed during a rage by her abusive stepfather, she is institutionalised at the Lennox House for the Mentally Insane. Her stepfather bribes Blue Jones (Oscar Isaac), one of the asylum's corrupt orderlies, into faking the signature of the chief psychiatrist, Dr Gorski (Carla Gugino), to ensure that Babydoll is admitted for a hasty lobotomy so that she can neither inform the authorities of the truth behind the events, nor reclaim her recently deceased mother's fortune. The procedure is scheduled for five days time. Accompanied by Emily Browning's mournful and unsubtle cover of 'Sweet Dreams (Are Made of This)', this opening sequence is relayed to the audience through a swift and highly stylised montage of images cut together to resemble a music video. It barely feels like a film and reveals very little about anything. Snyder utilises a number of distracting and unnecessary techniques; a grimy colour palette, frequent slow-motion, and an obsessive attention to illuminated mundane objects.

Not long after arriving at the asylum Babydoll retreats into a fantasy world where she imagines that she isn't a mentally unstable patient but a newly arrived virgin at a seedy brothel house. Blue doubles as the heavily eye-lined brothel owner while Dr Gorski adopts the role as the girls' Polish dancing instructor. Babydoll befriends four other more hardened burlesque dancers - Amber (Jamie Chung), Blondie (Vanessa Hudgens), Rocket (Jena Malone) and her older sister Sweet Pea (Abbie Cornish). She believes that her virginity will be sold to a 'High Roller' (John Hamm in a woeful cameo), set to arrive in five days, and is pressured into learning an exotic dance to impress him. It is through this intoxicating dance, which draws the mesmerised attention of everyone who views it, that Babydoll is able to fantasise about other worlds; a means she utilises to collect the items necessary for her escape from the brothel/asylum. With the exception of the reluctant Sweet Pea, the other girls are eager to partake and find freedom from their male tormentors.

The source of the inspiration is a vision Babydoll has when she first dances. Inside a temple in Feudal Japan she meets a 'wise man' that will assist her throughout her journey. This figure is played by Scott Glenn and is the only real source of entertainment in the film. He is quite amusing. He reveals that her desire for freedom could come into fruition if she can locate a map, a source of fire, a knife and a key from within the confines of her prison. The fifth item he stresses will be known to her when the time is right. I wonder what that could be. This idea altogether is such a generic one; find these items and they spell freedom. The 'wise man' pops up in various forms to introduce each fantasy mission and to brief them on their objective and that 'one more thing' that could prove essential to their survival. This is a common trope for mission-based video games and Snyder has made quite an amusing stab at this generic function. To capture these desired items, Babydoll must dance and distract the male victim so that one of the other girls has an opportunity to thieve it. 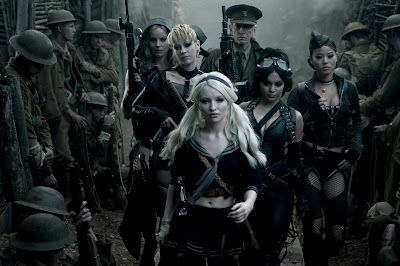 While their enemies are monotonous and enormous, we soon learn not to be concerned about the girls' survival in these worlds. They are indestructible (being thrown face-first through concrete doesn't even alter the make-up) while their enemies are struck down at will by their unlimited weaponry and incredible skills. Their true danger lies in their escape plan being discovered by Blue and several other vile male figures back in the first fantasy world. Having taken out monstrous samurai sword wielding figures, armies of Zombies, Orcs and Robot soldiers and an enormous dragon, the imagination is pretty out there. Except that it is all far from original. The series of video game levels feature a hodgepodge of borrowed elements from right field, left field and everything in between. Combining Zombies with WWI trench warfare, Orcs with Dragons and I-Robot with a runaway train, it sounds like it could be a riot. It isn't. Without any purpose to link these worlds, or any stakes within, all is for nothing. By the time you reach the world with the train, you will have lost interest long ago, and this is finally where something meaningful happens. The visuals, don't get me wrong, look amazing on initial sight. But the overwhelming use of CGI fails to maintain any interest in the production design. Overall, Sucker Punch is a culturally repugnant mess and an insult to thoughtful and well-crafted action-adventure filmmaking. It is a tiresome, offensive piece of self-indulgent junk that has no place in any artistic realm. Zach Snyder's freedom to do whatever he likes with an enormous budget for the purposes of mass marketing will be short lived if he makes anything to resemble this level of mediocrity again. Come to think of it, this is strike two for Mr. Snyder. I disliked 300 but its dire plot looks like a masterpiece compared to this. 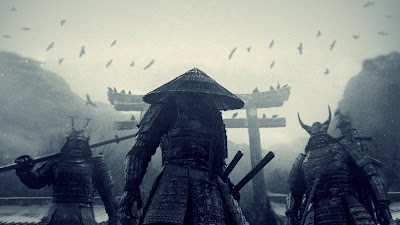 The performances are uniformly terrible, though Abbie Cornish delivers the best of the bunch. Emily Browning had nearly no dialogue for the first third, and apart from the occasional cheesy reactionary comment, the visual spectacles feature limited dialogue. Jamie Chung and Vanessa Hudgens had so little to do they felt like extras. Carla Gugino's Polish accent was completely unnecessary, and Oscar Isaac was so bad it seemed like he forgot his lines on several occasions. Never once did we see any of the girls even dance. Their dancing was supposed to be the way they were able to express themselves individually. Shamefully it was also how they were forced to objectify themselves for their male tormentors (who emerge in many forms; the mayor, the cook, the high roller). Trapped in a world where they are mistreated by men, they fight back against alternate forms of males (Orcs and Zombies) in order to flee their own oppressive male population. They struggle repeatedly in the reality but unleash hell in their fantasy. Where is the sense to any of this?
The conclusion is so ridiculous. How can you centre the film on one character, and then have this character realise minutes from the conclusion that the story was never about her. What is the purpose of Babydoll's character? To be framed for the murder of her sister, to enter this asylum and devise an escape plan and then sacrifice herself for a girl she had met five days earlier? Seemingly. Some may argue that there are good intentions beneath the spectacle here. I don't see too many. For Bjork and Pixies fans, you will also reel in disgust at the way iconic songs from these artists have been used throughout. Full of over-the-top stylistic devices and a series of ever-tiresome visual spectacles, Sucker Punch is soulless, pointless and maddening, and a failure in every single way.
My Rating: 1 Star (F)
Posted by Andy Buckle at 4:11 PM