The 2011 blockbuster season opens with Kenneth Branagh's visually impressive, though somewhat dramatically disengaging, Thor, starring Australian actor Chris Hemsworth in the lead role. As the first in a number of comic book superhero adaptations to hit theatres over the next few months, Thor is one of the preceding films to The Avengers (scheduled for cinema release in 2012). Thor will eventually join forces with Marvel superheroes Nick Fury, The Incredible Hulk, Iron Man and Captain America (amongst others) as part of The Avengers team. Agent Phil Coulson (Clark Gregg) pops up a number of times throughout the film to remind viewers that there is a bigger project in the works. After witnessing the fairly abominable trailer, I had low expectations, but I was quite surprised by how much I enjoyed it. Having said that, on post-discussion more negatives than positives become newly apparent. 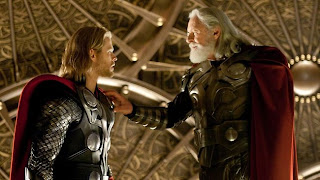 Thor (Chris Hemsworth) and his brother Loki (Tom Hiddleston) are the brave warrior sons of Odin (Anthony Hopkins), the ruler of Asgard, one of the Nine Realms connected by the Cosmic Tree of Life. Odin had once led his powerful army to battle against the Frost Giants of Jotunheim (another of the Nine Realms), who intended to use an artefact known as the Casket of Ancient Winters to take over each of the other realms, starting with Earth. The army from Asgard defeated the Giants and have since kept the Casket protected inside Odin's vault, and formed a fragile truce between the two realms. As a result of this triumph, the mythical beings from Asgard were worshipped on Earth as Gods.

On the day of Thor's coronation as King, Odin's vault is broken into by the Frost Giants with the intent of stealing the Casket back. Though they fail, an enraged Thor, whose coronation was interrupted by the breach, goes against his father's wishes and travels to Jotunheim with Loki and four of his companions to confront the Giants' leader, Laufey (Colm Feore). Thor and his colleagues find themselves in a fierce battle, but are saved at the last minute by Odin. Angered by his son's impatience and arrogant disobedience, Odin strips Thor of his powers and banishes him to Earth. Amidst a wormhole of lightning and cloud, Thor lands in the desert of New Mexico. His famous hammer, Mjolnir, is cursed and also sent to Earth.

The bitter, primitive-like Thor is discovered by Jane Foster (Natalie Portman), a scientist working on a meteorological theory with her assistant Darcy (Kat Dennings) and her mentor Dr. Selvig (Stellan Skarsgard). After witnessing the wormhole formulate from the sky, and accidentally running into Thor with her car, Jane is both concerned and intrigued by his delusional state and comically chiselled physique and convinces her colleagues to help him. Thor transforms (and rather quickly) from a state of bitterness, to one of bewilderment at Earth's social standards, to one of heroic assurance. When Thor discovers that his hammer has also landed in the desert and is being guarded and tested by a branch of the FBI called S.H.I.E.L.D, he seeks to remove it from within the compound and find a means back to Asgard. Back in Asgard, conflicts with Loki over his true genetic origins have sent Odin into an untimely comatose sleep. With the leadership of the Realm consequently turned over to Loki, his personal vendettas dissuade him from aiding Thor's return.

Thor quite successfully balances the dual Realms of Asgard and Earth, though the events on Earth are far less engaging. The three main characters are Thor, Loki and Odin and most of the central conflict arises through their relationship to one another and their struggle for power. The multi-racial Loki had the most potential for development, but he's disappointingly overlooked. There are some similarities in the plot to King Lear, and with Kenneth Branagh at the helm, this is not surprising, and likely intentional. Chris Hemsworth does a good job, endowing Thor with enough arrogance to force audiences to dislike him early on. His bond on Earth with Jane and quest to return to Asgard is riddled with light humour and enough charisma to win audiences back. Natalie Portman's character is a redundant love interest; and you wonder at what point in his brief banishment that Thor ever fell in love with her. Kat Dennings was only there for the occasional comedic one-liner. Who were most disappointing were Thor's friends, who come to Earth to help him. Sif (Jaimie Aleander) and Volstagg (Ray Stevenson) could have easily been his two accomplices, and apart from the odd line here and there, the other two had very little to do. I'm trying to forget how lame the action sequence in the near-abandoned desert town is. More time should have been given to Heimdall (Idris Elba), the Gatekeeper of Asgard. I thought he was the most interesting character in the film.
As expected, the stunning visuals were the film's most impressive feature, though the early action sequences may challenge the jitters of your stomach. The lengthy battle scene on Jotunheim was truly amazing, and the entire construction of Asgard was a visual marvel. There are some quite intense light flares during the characters transportation between realms, which I felt was a bit too much. The film opens and concludes with several mythical fight sequences, which reveal the full extent of Thor's powers. Though stripped of these powers on Earth, he still manages to take out a regiment of well-trained soldiers with ease. These fight sequences are downright boring in comparison though. Kenneth Branagh can be commended for establishing quite a strong bond between the brothers so that the sibling rivalry is a dramatic arc that feels genuine throughout. While a film like Iron Man 2 tried to include too many villains, Thor presents its villains in a most interesting way. Loki becomes the central villain, but he sends his wrath on Earth in the form of a vehicle (a giant metallic Golem) and seeks only to aid the Frost Giants, the most recognisable antagonists. 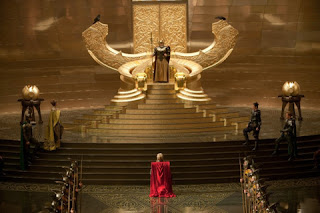 While the story is pretty ridiculous and there are moments that stand out as pointless and mediocre, Thor is still pretty entertaining. It is exactly what you expect from a superhero blockbuster, though it is far better than Hancock or X Men Origins: Wolverine for example. There is, to an extent, dramatic tension in the sequences in Asgard and some light-hearted humour to accompany his quest on Earth. Thankfully, enough weight is given to its hefty protagonist to lift this a head and half a shoulder above the disaster it could have been.
My Rating: 3 Stars (C+)
Posted by Andy Buckle at 12:17 AM