Having been blown away by my three previous experiences with the films of Andrei Tarkovsky, I am disappointed to say that I didn't like The Sacrifice so much. Critically, it is one that has tended to divide viewers, but I have still seen the term 'masterpiece' thrown around a few times. Sadly, this is Tarkovsky's final film; the great man died shortly after completing it, succumbing to cancer he had contracted during his shooting of Stalker. A film he dedicated to his son, The Sacrifice is very obviously a film made under his visionary guidance. 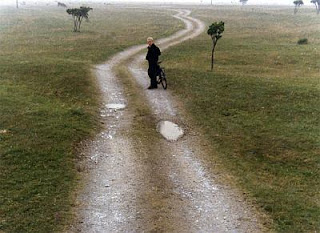 Endowed with a cinematic style that functions through the effects of laborious pacing, shots of extreme length (many clocking in at close to ten minutes) and the slow and near-unrecognisable movement of the camera, The Sacrifice is an impressive artistic accomplishment. Visually, Tarkovsky's films are always incredible, and the images he conjures up here are no exception. The problem for me was that there wasn't the same mysterious force keeping me captivated to the screen. Often in Tarkovsky's films, very little is happening, but you still feel compelled to keep watching. This feeling was not so apparent here. It took me a number of sittings to complete it, and for the most part I never felt engaged in the story. The second-to-last scene, made up entirely of a single tracking shot, is as grand an achievement as you are likely to see in cinema, though you may recognise that the burning derrick sequence in Paul Thomas Anderson's There Will Be Blood, shares some striking similarities.

The opening shot reveals the film's central character, Alexander (Erland Josephson), an ageing atheist actor and journalist. He is with his very young son by the lake near his home. His son, referred to as "Little Man" throughout the film, is a mute. Alexander likes expressing his feelings in monologue form, and he feels comfortable telling "Little Man" stories from his life. They are soon approached on bike by the local postman, Otto (Allan Edwall). He delivers a letter that has been sent to Alexander to celebrate the occasion of his birthday. Later that day, Alexander's family and friends will join him for a luncheon at his home. Amongst the guests, we meet Alexander's younger actress wife, his teenage daughter and Maria, the servant. Otto joins the party too, bringing Alexander a framed map of Europe from the 16th Century.

After a series of sequences documenting small chatter within the guests, the party experiences the opening throes of the end of the world via nuclear holocaust. All of a sudden the entire house begins to shake, and ornaments fall off their shelves. The news of the event are later broadcast over the television. Alexander's wife is distraught, but the men have no answers on how to react. That night, in a state of despair, Alexander vows to God to sacrifice everything he loves (he would destroy his home and even give up "Little Man") if only the fate of the world would be reversed. To top it all off, he is instructed by Otto to sleep with Maria, who he reveals is a neighbour of his and whom he believes is a Witch. Otto believes that this course of action is their only hope to stop the war. When he wakes the next morning, the world seems to have returned to normal, though the reality of Alexander's actions is never revealed to the audience. 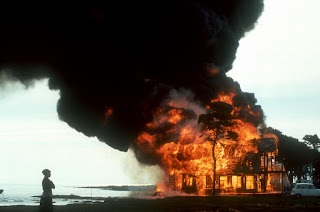 Aware of his own illness, Tarkovsky imbues the film with a message to future generations; to live in greater harmony with nature and one another. The opening and closing sequences demonstrate this; Alexander and his son are planting a tree by the rocky shore. He asks his son to surround the tree with stones to protect and preserve it. Throughout the film, we are revealed to the fragility of humanity on the brink of their destruction. Faced with the dilemma of considering just how strongly he values his ideals, Alexander undergoes an existential crisis in an act of protestation to faith and hope. Tarkovsky has ended his career with a film that honours his greatest mentor and inspiration, Ingmar Bergman. Erland Josephson was a Bergman regular and one of Sweden's most successful actors, while Sven Nykvist, Bergman's favourite cinematographer, is the man behind the camera here. It is essential viewing for any admirers of Tarkovsky, but this challenging, often-boring film, will appeal to few.