Un Prophete [A Prophet], the French representative for the Best Foreign Language Film at the 82nd Academy Awards is an absorbing, gritty, hard-edged and powerful prison drama from Jacques Audiard. The film tracks the prison life of 19-year-old Malik El Djebena (Tahar Rahim, the European Film Award Winner for Best Actor), condemned to six years imprisonment for his role in the brutal beating of a police officer. 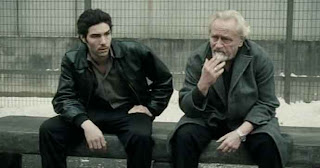 Arriving in prison alone and lacking any literacy skills, he quickly finds himself a young and fragile target amidst the already-hardened French prison system and its dangerous prisoners. Due to his part Arab, part Corsican descent he at first struggles to fit in within either side of the racially divided establishment. Ultimately he falls under the sway of the Corsican mobsters led by Luciani (Niels Arustrup), who has the support of a number of correctional officers and enforces a brutal rule. Malik comes under his protection after he is cornered and ordered to murder a fellow prisoner, a man named Reyeb, residing in the next block under witness protection. Malik's own life is threatened unless he goes ahead with the hit and for this harrowing scene alone, the film is worth watching. There is much more of interest to follow, however.

Throughout the film Malik is haunted by his victim, who had actually taken a personal interest and offered to help him learn to read and write in the tense minutes before his death. Malik remains guilty of his action, but knows also that he would never have survived unless he went through with it. In honour of the advice of Reyeb, he starts to take reading and writing classes and begins to work hard on developing his literacy skills. Impressed by his success with Reyeb, Luciani enlists Malik as a member of his crew and invites him around to make coffee for his gang and play cards. When a number of Luciani's men are released or transferred, he begins to rely on Malick earlier than he expected.

Malik is enlisted as Luciani's eyes and ears in the prison, but while working for Luciani Malik forms a close bond with Ryad, a Muslim friend who teaches Malik how to read and write, and Jordi, the prison drug dealer. With the Corsican and Arab gangs embroiled in a turf war, which is an encapsulation of the racial and class dynamics crippling French society right now, Malik manages to wheel and deal his way into a position of respect from both sides. Luciani eventually arranges day-long furloughs for Malik, which enables him a day outside to personally conduct Luciani's business; which includws a hostage swap and a casino negotiation. Unbeknownst to Luciani, Malik also utilises his free days and his prison protection to smuggle in and supply drugs and shift the power struggle between the Lingherri's, an Italian mafia group, and the Corsicans. 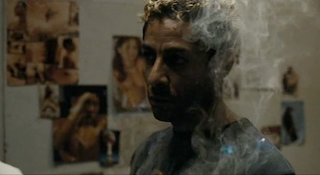 Visually Un Prophete is quite arresting and has you on edge of your seat for the entirety. The camera draws attention to every detail it can and is very much in the face of the characters. You feel like you are living in their cells with them. Predominantly hand-held, it is an effective method of documenting the prison atmosphere, which has a consistently heightened tension. The performances are all spectacular, especially Tahar Rahim, who starts out as a scared and insecure young man, who develops into a reliable soldier, before finally building the confidence to work his own business, lead his own crew and call his own shots. It is a seamless rise from invisibility to dominance. It tells the story of a nobody, an illiterate out-of-place youth, who rises the ranks to become not only somebody to be feared and respected, but someone who managed to flirt with danger and tame the race division of the prison and come out clean.

Crime is Malik's only means of gaining power; and while a life of petty crime had landed him in prison in the first place, his only means of survival is to perfect his abilities. The key detractor from this film was the implausible prophecy. A dream/vision he has of a deer crossing the road comes into fruition as he is held at gunpoint. The driver of the vehicle crashes into a deer, and Lattrache, a colleague of Luciani upset by the death of Reyeb, comes to believe that Malik is 'A Prophet'. Instead of killing him Lattrache immediately respects him. To ensure the authenticity of the prison experience, Audiard hired former convicts as advisors and extras. Un Prophet is a knockout, a thoughtfully constructed piece of entertainment that is well worth investing the time to see.