Winner of the Dramatic Grand Jury Prize at the 2012 Sundance Film Festival, Beasts of the Southern Wild, Benh Zeitlin's stunning debut feature, has been met with enthusiastic praise, also screening as part of the Un Certain Regard at the Cannes Film Festival, picking up the Camera d'Or for Best First Feature and the FIPRESCI Prize. It screens as part of the Official Competition at the Sydney Film Festival in June riding a wave of buzz, and while I was disappointed by where the story goes in the second half, it is an original and exhilarating human story worthy of the attention bestowed upon it. 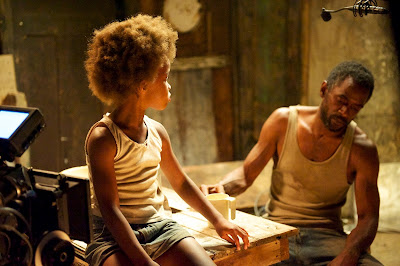 Six-year-old Hushpuppy (Quvenzhane Wallis) and her father, Wink (Dwight Henry), live in an untamed and dangerous Louisiana delta-community called The Bathtub. Here, all manner of creatures exist, with Hushpuppy herself tending to her assortment of pets. She lives in a poorly constructed house littered with junk and tries to keep out of the way of her hardened and alcoholic father, who lives next door. Beyond teaching her to be tough and resilient, he seems to be of little use. Her mother left when she was very young - where she went we don't know - but Hushpuppy shares imaginary conversations with her in the kitchen. It is only Hushpuppy, her father, the other colourful members of the Bathtub community, and a pending ecological doom.


You see, the bathtub is divided from the mainland by a Government cordoned levee, and if there is a natural disaster from the south - a hurricane for example - then the Bathtub would be completely destroyed. It is, and Wink and Hushpuppy take to their makeshift boat (made out of the back of a Ute) in search of other survivors. It is also discovered that Wink's health is ailing, and after the troupe find themselves under the protection of the mainland, with every desire to escape, Hushpuppy must come to terms with a life without her father, and with the help of strangers along the way, starts a search for her mother. I haven't even mentioned the presence of the Aurochs, prehistoric beasts that emerge from the frozen south following the storm. 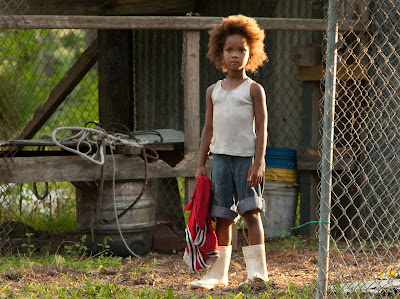 The film is a sensory phenomenon and is brimming with energy. Zeitlin makes use of an excellent score and there is plenty to marvel at visually in the attentive world-building. Ben Richardson's photography perfectly suites the film's tone and is predominantly kinetic and intimate hand-held. The score, one of the year's most memorable to date, is also highly commendable. This intriguing place, on the fringe of civilisation, is one unique community. Deprived of the luxuries of the mainland, the people of the bathtub live harmoniously with nature, living off fresh food from the land and sea, sharing their rations with one another, and enjoying their limited responsibility and self-imposed freedom. While this place is full of energy, and an early party sequence depicts this beautifully, it is also a feral and dangerously unhealthy environment, especially for a young girl to grow up in.

Beasts also rests heavily on the tiny shoulders of Quvenzhane Wallis, and she is unforgettable. She is the tale's central protagonist - reacting to everything that happens to her in a way wise beyond her years. Her understanding of the world is very astute and it is her endearing struggle that results in the film being as successful as it is. Unfortunately, on the two occasions I have watched the film, the finale was not as affecting as I would have expected. Dwight Henry, in his first acting role also, gives an impressive performance. There are times when his tough love and lack of patience frustrates us as viewers, but he is a wild character we understand more throughout the film and he makes a number of admirable decisions with the goodwill of both his soul and his daughter in mind. 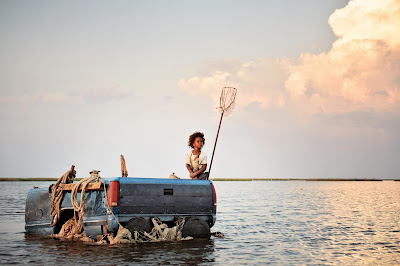 My qualm with the film was the fact that it seemed to lose its way in the meandering second half. There was a driving narrative to begin with, but following the storm, the film's point becomes less clear, and becomes more comprised of vignettes. It is all brought to life with such a fresh vision that these lapses are largely forgiveable. It is a film worth watching for its originality alone. With a powerful father/daughter relationship, thought-provoking themes about our ever-changing planet and an exciting cinematic vitality, Beasts of the Southern Wild will be a film long discussed and debated. It is a stunning debut feature from Benh Zeitlin, but it was disappointing to learn that some of the same rewards were not offered on a repeat viewing.