Un cuento chino [Chinese Take-Away], written and directed by Sebastian Borensztein and starring the incomparable Ricardo Darin (The Secret in Their Eyes), is an Argentine comedy. It's proven to be a popular one, having become the highest grossing non-US film released in Argentina last year, and is sure to be a hit with the festival audiences at the upcoming Spanish Film Festival. Chinese Take-Away won both Best Film and the Audience Award at the Rome International Film Festival and the Goya Award for Best Spanish Language Foreign Film. 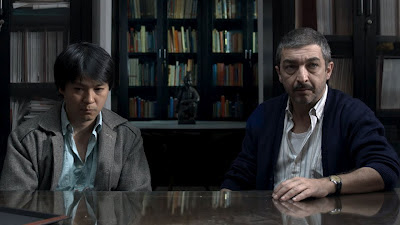 Darin stars as Roberto, an embittered and lonely man who runs a hardware store and lives a life of solitary and methodic routine with his memories and his simple pleasures. His relatively dull but comfortable and content Buenos Aires existence is turned upside down when he feels compelled to help a hapless Chinese man named Jun (Ignacio Huang), who is unable to speak a word of Spanish. He reluctantly takes him in as a lodger while he helps him search for his uncle.

Roberto, learning of an address tattooed to the man's arm, which is the destination he was headed for before being kicked out of his taxi, takes him there only to discover that Jun's uncle has moved on. Trips to the police station, the Chinese Embassy and a neighbourhood heavily populated by Chinese residents bring no more luck.

For Roberto, having Jun around the house and store is a hindrance, despite the fact that he feels obliged to Roberto and is willing to work for him and is actually very kind and well meaning. Roberto's ignorance and hostility, while often used for comedic effect, certainly evokes sympathy for Jun. For Roberto, not being able to speak his language and disrupting his solitude is all too much. Ultimately, Jun's tragic story is revealed to Roberto, who enlists the help of a Chinese delivery boy to translate, and both of their lives are changed.

Roberto collects news clippings of bizarre worldwide events controlled by chance and fate, which he keeps in an album. At intervals throughout the film, Roberto imagines and narrates some of these events, fantasising that they shake up his life. It is one such bizarre story that opens the film, and later becomes the catalyst for the renewed bond between Roberto and Jun.

Roberto's eccentric routine is used to often-sidesplitting comic effect. Examples of his wild behaviour includes a 'lights out' at exactly 11pm every night, serving himself a hollowed-out bread roll and a coffee every morning for breakfast, and counting every new item of stock to check he hasn't been cheated. Of course there are amusing culture clashes between the new housemates, too.

Borensztein's direction is calm and controlled, the story is never in a rush - which makes it easily digestible while never failing to be intriguing - and never feels like it is stretching its realism by being excessively whimsical. This is about regular people who find themselves in an unexpected, and uncomfortable situation, and how each one adapts, even if Roberto takes a little bit longer. The story has some flabs, and a couple of montages depicting Roberto's growing frustration with Jun's presence, became a bit testing.

The performances from Darin and Huang work well, but I am yet to be disappointed by the versatility of the veteran Argentinian. There are a few interesting sub-characters to liven up the proceedings, including Mari (Muriel Santa Ana), an acquaintance of Roberto who is in love with him. Roberto displays evasive behaviour, unwilling to alter his simple existence any more than he has already. The story, a buddy film in part, is ultimately about companionship and accepting change. Ricardo is sad, lonely and set in his ways. He finds the inspiration and motivation to change, and seek the company he so desperately needs, through the most unlikely of sources.

Chinese Take Away is charming and pleasantly amusing, making the most of the beguiling and ultimately heart-warming friendship that develops between Ricardo and Jun. It deals with existential themes; cross-culture relations, the belief in the extraordinary and the unexpected, and how a life that exists without surprises and a bit of chaos can never be one truly lived. As I mentioned above, it should be a major hit, and an order of Chinese Take-Away is a smart order.