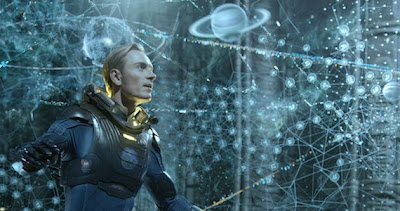 For many, June 7 is one of the most exciting days of the year, maybe with the exception of July 19 (TDKR). It marks the opening of Prometheus, Ridley Scott's new science fiction epic, which has been hotly anticipated and heavily campaigned, but thankfully ensures that viewers are still kept in the dark. In what has been a tumultuous week for the film, mixed reactions have been drawn with more than an air of underwhelm and disappointment. Having already seen the film, I can certainly give it a recommendation. It is a visual and atmospheric triumph, has ambitious themes, strong performances, and is unrelenting in its intensity. Sadly it is let down by a script that simply tries to include too much, and somewhat clumsily leaves very recognisable holes. It could depend on your expectations - whether you are expecting a direct prequel to Alien or its own individual entity - which side you fall on. Also released this week is Friends With Kids.

Prometheus - Ridley Scott, director of Alien and Blade Runner, returns to the genre he helped define. With Prometheus, he creates a groundbreaking mythology, in which a team of explorers discover a clue to the origins of mankind on Earth, leading them on a thrilling journey to the darkest corners of the universe. There, they must fight a terrifying battle to save the future of the human race.

Friends With Kids - A daring and poignant ensemble comedy about a close-knit circle of friends at that moment in life when children arrive and everything changes. The last two singles in the group observe the effects that kids have had on their friends' relationships and wonder if there's a better way. They decide to have a kid together - and date other people. There are big laughs and unexpected emotional truths as this unconventional 'experiment' leads everyone in the group to question the nature of friendship, family and finally, true love. It features half the cast of Bridesmaids, but I thought the trailer looked quite funny. Adam Scott, Chris O'Dowd, Kristen Wiig are all funny, and watchable actors.


Weekly recommendation: Has to be Prometheus. Unmissable in a cinema. See it on the biggest screen possible. 2D is fine, if you're questioning the extra expense.
Posted by Andy Buckle at 2:33 PM