Excision is an American horror film written and directed by Richard Bates Jr. and is the feature-length adaptation of his 2008 short of the same name. It premiered at the 2012 Sundance Film Festival, and is a demented and blood-soaked tale of dysfunctional family, teenage angst and social alienation and deluded obsession. 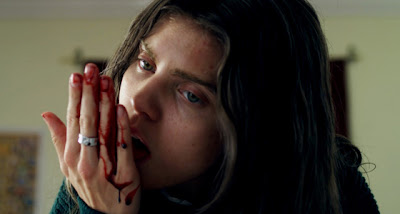 Pauline (AnnaLynne McCord) is an unpleasant and unhappy teenager; a social outcast battling adolescence, dreaming of disturbing images and struggling to come to terms with her obsession with flesh, surgery and a desire to have a future in medicine. She alienates herself from her high school peers and acts out at home, much to the concern of her stern and demanding mother, Phyllis (Traci Lords). She has a pudgy, steer clear of the mother/daughter issues father (Roger Bart) and a younger sister, Grace (Ariel Winters), who is the picture of perfection despite slowly succumbing to the effects of cystic fibrosis. Amidst her problems - resisting her mother's best interests to improve her (cotillion classes and forced therapy with her pastor) - she studies up on all facets of the human anatomy and plots to lose her virginity to Adam (Jeremy Sumpter), the boyfriend of the popular girl at school.

Pauline is actually quite a pretty girl, but her acne scarred skin and ugly scabs, not to mention her surly, slouching posture and leering gaze, causes everyone to justifiably regard her with contempt. But as horrible as she is, McCord still manages to create an endearing character out of Pauline, one we oddly find ourselves sympathising with her. I think this is the feature that surprised me the most about Excision.

Annalynne McCord is excellent, giving a fearless performance. It is perhaps the most impressive feature of the film, apart from the ending, which worked for me but is one viewers will either a love or hate. It's great to see a film that offers up some surprises. The evolvement of Excision's demented premise, while not particularly elegant, hints at an idea that we hope won't come true, and ultimately won me over in the second half.

The film is full of exaggerated caricatures - the overbearing mother, the emotionally-absent father, the perfect popular girl at school - and they are brought to life by the universally solid cast and fun cameos from John Waters (that John Waters) as her pastor, Malcolm McDowell and Matthew Gray Gubler as two of Pauline's perplexed teachers and Ray Wise as her pitch-perfect, President Bush-supporting principal add to the fun. The film's humour is hit-and-miss, but it is a welcome addition to this grisly little concoction.

Bates, who clearly has a love and respect for filmmakers such as David Cronenberg, Dario Argento, Alejandro Jorowosky, John Waters and John Hughes, claimed in the Q and A that followed the session that he tried to make a film that honoured the directors that got him through high school and cemented his love for cinema.

Excision is evidently his passion project, with Bates scraping together the funding and turning his short into a feature that displays plenty of enthusiasm and visual panache, while being more than a little self-indulgent and influenced by personal experiences. Pauline's vivid dream sequences are certainly inventive, the film has a slick, glossy look and the use of punk rock music suited the rebellious-teen-psychological-thriller tone. Not an amazing film, but a taut and fun little shocker that lingers in the mind.