Goodbye is a patiently paced, exquisitely crafted Iranian drama from independent writer/director Mohammad Rasoulof. Rasoulof, an opinionated filmmaker who spent a period of time imprisoned on charges of collusion and propagandising against the regime, was not permitted to leave his country to attend the film's premiere at the Cannes Film Festival in the Un Certain Regard category in 2011. Fellow filmmaker Abbas Kiarostami fought for his release. Winning Best Director of the Un Certain Regard, Rasoulof follows the success of Asghar Farhadi, whose feature film, A Separation, won the Academy Award for Best Foreign Language Film, continuing a particularly strong period for Iranian filmmakers. 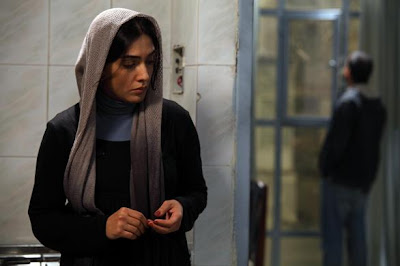 Goodbye tells the story of a young lawyer, Noora (Lelya Zareh), who lives in Tehran and is searching for a visa to leave her country. She has recently had her licence to practice law revoked for participating in activist campaigns against the government, and her husband has been exiled from the city because of his published articles as a political journalist. Pregnant and alone she travels through the city from one government office to another searching for the means to plot her leave. This process is an illegal and complicated scheme. It requires an agenda - her husband's permission on documents, a scheduled event in her new destination, and flights booked to an exact time/day - and she meets some abhorrent social and citizenry restrictions along the way.

Throughout the film Noora is approached by two men desiring to search her apartment for remnants of her husband's still-existent notes and manuscripts, and in one lengthy take we see one man rifle through every book on her shelf and then leave with her computer hardrive. To make matters worse, her revoked licence and her ties to political activism make it nearly impossible to procure the permissions she needs. More details emerge about her pregnancy throughout the film, which poses further stress, and an abortion is considered as an alternative means to secure her freedom from oppression.
Comprised of long, meticulously framed, stationary shots, Goodbye is a slow-moving and wearying film. But it is a satisfying one, because it offers privileged insight into a society fraught with issues, the quite shocking way that women are treated (ignored and disrespected) by the male-dominated society. Noora, in her attempts to check into a hotel room, is asked if she is accompanied by her husband and told she is unable to check in without his approval.
Noora is front-and-centre amongst all of this and we watch her continued growth in dread and despair. On one hand, there is the fear of never being able to leave, and on the other, there is the fear of being caught in the process.

There are several exchanges with a stern assistant to a male figure who oversees the visa contract, but we never see him. A figure behind a closed door is securing her future. While the first meetings are cold and emotionless - with Noora slipping folded bills under her keyboard as incentive to keep working on her case - but by the time her visa is ready, the women share a respectful smile.
Goodbye is a bit slim on the drama, which means it is less compelling than intriguing, despite a building sense of dread and a powerful and affecting finale, but is certainly an impressively crafted and very personal film from a controversial filmmaker, who stands alongside Kiarostami, Farhadi, and Jafar Panahi (This is Not A Film) as an internationally recognisable talent.
My Rating: ★★★1/2
Posted by Andy Buckle at 11:21 AM