Courtesy of Transmission Films, the Australian poster for Cate Shortland's new film, Lore, has been released. It is a German-Australian co-production, produced by Karsten Stoter, Liz Watts, Paul Welsh and Benny Drechsel, written by Cate Shortland and Robin Mukherjee and stars Saskia Rosendahl in the central role. It is Shortland's anticipated follow-up to 2004's Somersault (starring Abbie Cornish and Sam Worthington). 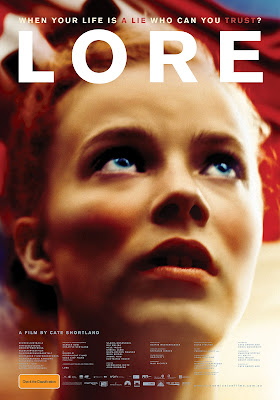 Lore had its Australian premiere last night at the Sydney Film Festival, where it screened as part of the Official Competition. It received a very positive response. Check out Simon Miraudo's review of the film for one example. It does not yet have an Australian release date, but is certainly one to keep an eye out for.
Posted by Andy Buckle at 11:00 AM