Policeman is the first feature film from writer/director Nadav Lapid. Winner of three awards (Best First or Second Work, Screenplay and Cinematography) at the Jerusalem Film Festival, Policeman is an Israeli social study distinctly split into two halves. The first follows Yaron (Yiftach Klein), the ultra-macho leader of a squad of highly trained operatives who specialize in the neutralization of Arab terrorists, and the second half focuses on a group of Jewish student revolutionaries, dissatisfied with the gap between the country’s richest citizens and the struggling lower class, who plot to send a message. It is a somewhat uneven film with neither half proving to be particularly engaging, and when there is a moment of drama/suspense it really didn’t leave much of an impact. 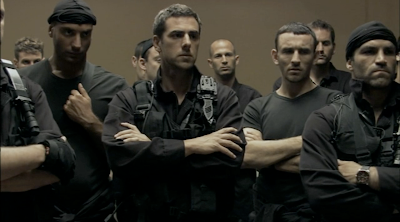 Yaron is in peak physical condition, oozing with masculinity and the epitome of Israeli military prowess. His wife is pregnant and approaching the delivery of their first child. He loves knowing that she needs him to take care of her and sharing the news with his squad buddies - who share a physical but affectionate camaraderie, evident in their audibly accentuated hugging and slaps on the back - but he is evidently a self-involved individual.

I was turned off his character completely when he openly declared he was displeased about not being able to sleep with his wife while she was pregnant, and then later hits on a waitress by pulling out his gun and asking if she wants to 'stroke it'. There is one quite amusing instance when he picks up one of his friend’s babies and checks himself out in a mirror. Is he suited for fatherhood?
One member of the group, Ariel, has a surgery scheduled to try and fix a brain tumour. Yaron, also dealing with a lawsuit as a result of an operation that left innocent Palestinians dead, means to amend their problem by having their tumour-stricken friend, who can’t stand trial in his condition, to take the fall.
The student revolutionaries, led by blonde-haired Nathanel (Michael Aloni) and Shira (Yaara Pelzig), a stony-gazed poet, plan to kidnap some of the nation’s wealthiest billionaires at a wedding and read out a decree on television that declares: “its time for the poor to get rich and the rich to start dying”. They don’t seem to care about how much harm they do as long as their revolutionary ideas are expressed and met. They meet a hurdle when one of their squad, Oded, reveals their plans to his father, who then decides to accompany the students and protect his son. 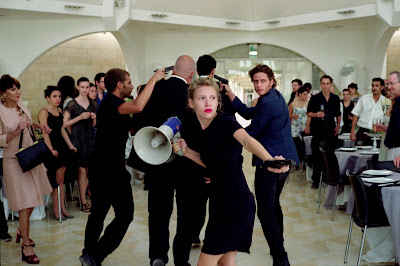 The film’s temporality is cloudy for the most part. Perhaps that’s the idea? For most of the second half I felt like we flashed back to the event the squad have been discussing, but from the perspective of the other side. It is later revealed to be chronological, which I was surprised to learn. After being introduced to Yaron and his team, we leave them for about an hour and focus on the other side of the ongoing Israeli social struggle – a very different ‘group’. To me, this created a disconnect, because as intriguing as this squad's camaraderie was, it didn't feel like it established anything other than their masculine bond, and hadn't earned my interest in discovering what happened. Ultimately, that's not the case, but I did begin to wonder, through the film's glacial paced second half, what the point was.
Yaron and his team usually neutralise Arab terrorists, not Jewish ones, and I think there is meaning to be found in the film's peculiar closing shot. We see the inevitable confrontation, but I hope that the message isn't what the students achieved, but the individuals involved and how they reacted to the situation presented them. The fact that white Jewish terrorists, and women, are also a threat to the security of 'the most beautiful country in the world' (as Yaron proclaims in the opening minutes), is a sign that their social issues are worsening. The fact that they have to do with economic inequality, and not just religion, is also interesting.

I admire the film for highlighting some thought-provoking Israeli issues, and the running theme of an internal liability within a squad (the squads's lawsuit and Ariel, and Oded for the students) that is considered for elimination. There were also some nice visuals and interesting framing choices, while Klein was a strong screen presence as Yaron. Ultimately, it failed to engage me in the second half and perhaps it is my lack of knowledge about Israeli politics and social instability, but none of its dramatic moments ever raised an emotion or resonated with me, either.