Rampart, which premiered at the 2011 Toronto International Film Festival, is Oren Moverman’s follow-up to the fantastic film, The Messenger, which follows Ben Foster and Woody Harrelson’s characters after being assigned to the Army’s Casualty Notification Service. Moverman and Alessandro Camon won the Silver Bear at Berlin for their script on The Messanger and Woody Harrelson, giving one of his best performances, was nominated for an Academy Award.
Moverman re-unites with Harrelson for Rampart, an intense, but severely disappointing character study of an LAPD veteran, Dave Brown (Harrelson), forced to face his past sins, and answer to his recent misconducts with a department-wide corruption scandal in full force, and the city wanting justice on dirty cops. We follow him as he falls into an emotional spiral, and finding himself unable to trust anybody. 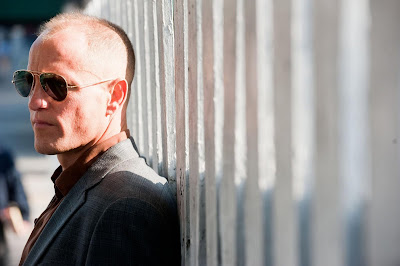 While I respect Moverman’s intentions of setting this study within a very specific period of the LAPD’s history (the Rampart Scandal, one of the most widespread cases of police misconduct in United States history) and focusing on a very particular period of Brown’s life and career, he and screenwriter James Ellroy (L.A Confidential) forgot to tell a story even remotely engaging or worth telling, and one that offers no payoff or reward to an audience for the ordeal.


Despite some attempts to liven the image with some visual flair and inventive camerawork, I felt scenes were over-edited, distracting from the dialogue exchanges and detracting from the power of Harrelson’s work. While still a very compelling screen presence - and lets be honest, he always is – Harrelson is portraying a character possessing no redeemable qualities, and one so uninteresting and so unsympathetic that his talents weren’t very well utilized. I much preferred his work in The Messenger.
Brown, a Vietnam veteran and a dirty cop for over two decades of service with the LAPD, has been successful in keeping the streets clean – but has developed an unsavoury reputation along the way. He is a sexist, racist, bigot, misanthrope and a womanizer. In short, not a very nice person. As a result, we have no real sympathy when his dark past catches up with him. Not that we are supposed to, but despite being with him the entire film, these attributes are revealed but never solidified. He has a child with two different women – both sisters (Anne Heche and Cynthia Nixon) - and is an irresponsible parent to both of his daughters. He tries to pick up women at bars almost every night, and when he starts sleeping with a lawyer (Robin Wright), his life becomes even more stressful when he fears she is working to bring him down.
If you look through the credits there are some excellent actors in the film, but none of them are given any significant screen time and have boring characters to work with. Ice Cube, Steve Buscemi, Sigourney Weaver, Ben Foster and Ned Beatty appear, in addition to those already mentioned. Ice Cube and Beatty, who portrays a villain in every film these days, have the most time and have the most bearing on Brown’s character, but Beatty’s story is just ignored in the end.
That brings me back to the film’s main problem. Nothing actually happens. The story is incoherent and continually refers to events that have taken place before the film and we don't see. It is like a cycle of self-destruction. There is no momentum, and though committed to probing into the darkest corners of Brown’s mind, and accompanying him through every step of torment, he does very little. While there are a couple of events in the middle that set the second half in motion – Brown caught on camera beating a suspect for example -  things just fizzle out again. It is not a pleasant film to watch because we are in the quagmire of despair with a desperate and unlikeable individual, and ultimately a frustrating and forgettable slog. The first dud of the festival.
My Rating: ★1/2
Posted by Andy Buckle at 11:51 AM