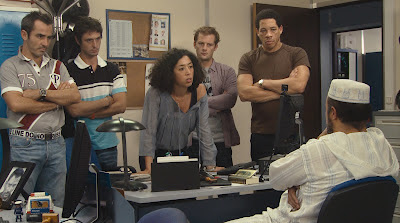 There are just three films hitting Australian cinemas Thursday 28 June - Ice Age: Continental Drift, Where Do We Go Now? and Polisse. The latter I have seen. Compelling and harrowing viewing.

Ice Age: Continental Drift - Scrat's nutty pursuit of the cursed acorn, which he's been after since the dawn of time, has world-changing consequences - a continental cataclysm that triggers the greatest adventure of all for Manny, Diego and Sid. In the wake of these upheavals, Sid reunites with his cantankerous Granny, and the herd encounters a ragtag menagerie of seafaring pirates determined to stop them from returning home. I have not seen an Ice Age film since the amusing original, and having seen a trailer the other day – which oddly resembles the Pirates of the Caribbean franchise – I have no intention on returning.

Where Do We Go Now? - Set in a remote village where the church and the mosque stand side by side, Where Do We Go Now? follows the antics of the town's women to keep their blowhard men from starting a religious war. Women heartsick over sons, husbands and fathers lost to previous flare-ups unite to distract their men with clever ruses, from faking a miracle to hiring a troop of Ukrainian strippers. This is writer-director-star Nadine Labaki’s show, and it was both selected to represent Lebanon at the 84th Academy Awards and picked up the People’s Choice Award at the 2011 Toronto International Film Festival. Reviews have not been positive, however.

Polisse - Winner of the Jury Prize at the 2011 Cannes Film Festival and nominated for 13 César Awards, Polisse follows the daily lives of a tight-knit team of men and women working in the Child Protection Unit of the Parisian police. Basing her richly textured script on real child investigation cases, writer-director actor Maïwenn has gathered an accomplished ensemble cast of French actors who convey the emotional strain of the unit's work with gritty realism. They not only deal with the stress of their jobs but the inevitable fall-out in their personal lives - breakdowns, divorce and adulterous relations within the force. In between, there are frequent flashes of humor as the team attempts to diffuse daily realities. As the cases, confessions and interrogations pile up, the squad members have only each other as support as they face an uphill battle against both criminals and bureaucracy. With the exception of a bizarre ending and Maiwenn’s self-involvement in front of the camera, as a powerful doco-drama, a harrowing social commentary and as an intricate character study, this taut collaboration of a web of stories has plenty going for it. I wouldn't miss it.

Weekly Recommendation: Polisse is certainly worth a look; it is one of my favourite films of the year. Brave and A Royal Affair, which hit cinemas last week, also come highly recommended. The former is a return to form for Pixar; a delightful and beautifully animated fantasy tale chronicling a powerful mother-daughter relationship, and the latter is a Danish period/costume drama that should prove engaging even for audiences who usually dislike the genre.