Moonrise Kingdom, the new film from the great Wes Anderson (The Royal Tenenbaums, Fantastic Mr. Fox), who co-wrote with Roman Coppola (son of Francis-Ford and co-writer of The Darjeeling Limited), opened the 2012 Cannes Film Festival and received near-unanimous praise. This is quite uncommon for one of his films, yet its release in the United States was peculiarly limited. It makes its Australian premiere at the Sydney Film Festival, but has a scheduled release in cinemas on August 30. 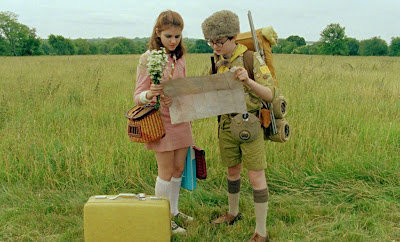 It can and has been argued that Anderson has been beating the same drum for a while now, with both The Life Aquatic with Steve Zissou and The Darjeeling Limited not as well received as his early works, Bottle Rocket, Rushmore and The Royal Tenenbaums. But with Fantastic Mr. Fox, an extraordinary adaptation of the beloved Roald Dahl children's novel, and now Moonrise Kingdom, which is a delight from the opening frame (and that gleeful sense of recognition of Anderson's return to the screen) to the thrilling finale, he creates a pair of masterworks. Anderson has continued his run of zany inventiveness, utilising all of his trademark quirks, visual and stylistic flair and excruciatingly considered attention-to-detail to create what may be perceived over time as one of his greatest accomplishments.
Set on the Island of Penzance off the coast of New England - which is amusingly introduced by a very insightful narrator (Bob Balaban) - in the summer of 1965, Moonrise Kingdom tells the story of two twelve-year-old misfits, Sam Shakusky (Jared Gilman) and Suzy Bishop (Kara Hayward), who fall in love and run away together into the wilderness. Sam is a peculiar boy and an orphan and despite being the most skilled, he is also the most unpopular member of the Khaki Scouts. He resigns, leaves a note and disappears one morning, much to the bewilderment of the leader of Troop 55, Scout Master Ward (Edward Norton).

He files the disappearance with Captain Sharp (Bruce Willis), the island trooper, who investigates and links Sam with Suzy, the only daughter of Mr. and Mrs. Bishop (Bill Murray, Frances McDormand). Suzy, who has three younger brothers, is misunderstood and largely ignored by her parents, unhappily married legal councillors. Turns out she has disappeared too, having been won over by Sam's frank interest, and attractive proposition. As the various authorities try to hunt them down; Ward and his swarm of scouts who have mistaken the search for a fugitive hunt, Sharp with Suzy's parents in tow, and 'social services' (Tilda Swinton), a violent storm is brewing off-shore and the peaceful island community is turned upside down. 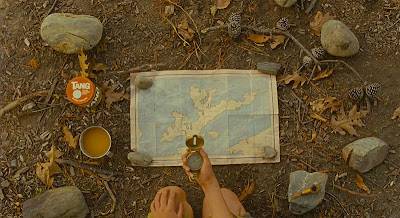 This is an odd film, there's no doubt about it. I would not have expected anything less than such a sprightly concoction of ideas, events and characters. But as bizarre as it is, there is plenty grounded in a conventional reality here. As a coming-of age tale it is impossible not to be drawn in as a viewer and the kids really win you over. Sam and Suzy are interesting in their own right - and Gilman and Hayward are fantastic - but their affections for one another, brewing from adolescent instinct and innocence and a desire to escape their less-than-spectacular daily lives for a stolen period of freedom, is very sweet and perfectly acceptable.
Anderson's attention to detail, as usual, is simply extraordinary, but I think he takes it to another level here, imbuing not just interior locations with carefully selected and crafted decor, but also the island's unexplored wilderness. His framing is meticulous and the image is applied with a pleasant colour palette, highlighting the yellows and beiges of the scout uniforms. Nearly every frame is littered with subtle delights, and Alexander Desplat's score is one of the catchiest I have heard so far this year. It reaches a wonderful crescendo during the climactic chase sequences. It will remain in your head for days. It is these concluding sequences that I think are perhaps a little weaker, narratively, than the rest of the film. With all the pieces in place Anderson seemed a little unsure how to wrap it up. 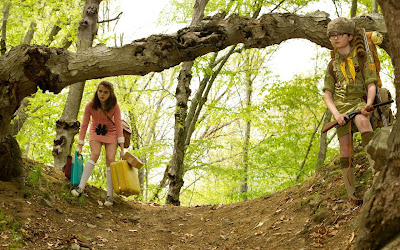 A feature of Wes Anderson's films that I always find interesting is his characters. Usually misfits of some kind with an odd appearance, inexplicable obsessions and bizarre physical ailments, they always have something to surprise a viewer. Sam, with his fur hat and pipe, and Suzy with her binoculars, each have distinct characteristics that are used to identify them throughout the film. While the children are central to the story, and Sam's Khaki Scout buddies play a large role in the second half, time is given to the adults as well. Both the overly-ambitious Ward and the lonely and inept Sharp have strong character arcs, while Bill Murray, by simply playing himself, effortlessly evokes a laugh or two. I mean, there is a scene where a shirtless Murray (wearing brightly checked trousers at the same time) walks around the house wielding an axe. This should make no sense, but having seen what his character has gone through - losing his daughter, and potentially his wife to another man - it absolutely does.
Moonrise Kingdom is also very funny. While they are not necessarily of the laugh-out-loud variety, a keen and attentive observer will find plenty of amusement purely in the film's details, but it is also very cleverly written, and some of the events so baffling, it is impossible not to laugh. This is not a film that will appeal to everyone, but if you're an admirer of films like Stand By Me and have that youthful longing for adventure, this will be a treat. For this reviewer, all of Anderson's films are a pleasant and rewarding experience in some way or other, and the charming, and unashamedly whimsical Moonrise Kingdom, which features pitch-perfect performances from a couple of actors who have seen better days in Edward Norton and Bruce Willis, and features two of his best creations yet in Sam and Suzy, was no exception. Oh, and for further delights, stick around through the closing credits. You will learn all about Desplat's wonderful score. Sure to be a highlight of the festival.
My Rating: ★★★★1/2
Posted by Andy Buckle at 12:50 PM