La Pirogue is a commendably told and the moving story about a group of Senegalese men with dreams of starting a better life in Europe (or Brazil if they end up drifting there) who battle the Atlantic Ocean currents in a simple fishing pirogue. Directed by Moussa Toure, La Pirogue screened as part of the Un Certain Regard at this year's Cannes Film Festival, and the Sydney Film Festival marks its Australian premiere. The illegal and extremely dangerous mission was attempted by thousands during 2005 and 2010, with many perishing in the attempt. This film was created in memoriam to those that perished and to humanise those who may have been received with suspicion and contempt upon arrival. 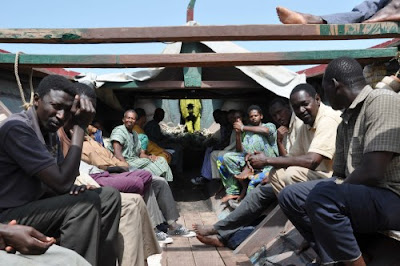 Baye Laye (Souleymane Seye Ndiaye) is the captain of a fishing pirogue who dreams of earning a better living for his family. When he is offered to lead one of the many that have been arranged to embark towards Europe via the Canary Islands, he reluctantly accepts, knowing the perilous journey ahead and the dangers involved. Accompanying Baye Laye are his younger brother, a budding musician, his best friend, who hopes to join a European football club, an untrustworthy and money-hungry man named Lansana, who put the trip together and recruited the troupe, and a female stowaway, the lone female on board.

In total there are 31 squeezed into the base of the fishing boat, sharing their meagre rations and stories, and overcoming their tribal differences. Baye Laye, their headstrong captain, tries to keep the peace, but after finding themselves in the waters of a stranded pirogue - and having to ignore them - and then facing a violent storm, which brings many casualties on the group, their destiny no longer rests in his hands.

La Pirogue is taut and quite tense, the obstacles are perilous and there is a real sense of danger. Toure manages to effectively introduce and flesh out quite a few unique and well-drawn characters. Souleymane Seye Ndiaye is especially compelling as Baye Laye, a supportable leader who we lose hope right beside. Some of the film's best moments are the quiet ones shared by the small groups of characters, reminiscing on what they are leaving behind and speculating what they will find.

Many already have work and a residence lined up, while others are trying their luck. Baye Laye's younger brother, not particularly responsible, bonds with one of the elders and becomes his brother's primary support when things go sour. The construction of the film is also quite a feat, being set almost entirely on the pirogue, which is really not that big. The photography is very good and the accompanying score also served the film well. This is the first film I have seen from Senegal, I believe. It is great to see a film that has highlighted a story likely completely unknown to most of the world.