Paolo and Vittorio Taviani's powerful drama-within-a-drama, Caesar Must Die, which picked up the Golden Bear earlier this year at Berlinale and is playing in the Official Competition here at the Sydney Film Festival, is a mesmerising blend of documentary, narrative and cinematic style. It is one of the most original and inventive, and ultimately inspiring, ways to bring Shakespeare's Julius Caesar to the screen one could imagine. 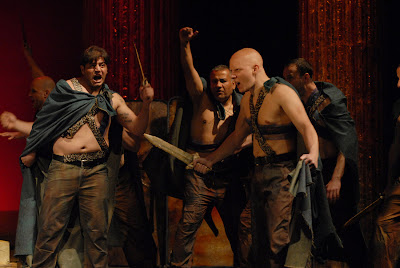 The film was made in Rome's Rebibbia Prison, where the inmates are preparing to stage Shakespeare's Julius Caesar. The film opens in colour with a crucial scene involving Brutus from the final public performance, before taking us back to the proposition to stage the play and the auditions for the roles, appearing in black and white. These are very entertaining. Once the primary roles have been cast - though everyone who auditioned has a role of some sort - the inmates begin to explore the text. They find unexpected passion from within themselves, develop a kinship with their fellow inmates that may never disappear, and within the tale of fraternity, power and betrayal, parallels to their own lives and stories.

Knowledge of Julius Caesar is not essential to understanding and benefiting from this film. Hey, I loved it. Some of the play's rich themes - possessing the power as Caesar once did, only to be tempted by tyranny and ultimately turned on by those he trusted - become apparent throughout the film. For many of these men, imprisoned for drug and contraband trafficking, mafia-related felonies and even murder, unraveling Caesar's story and emotionally involving themselves in their characters does unlock parallels. 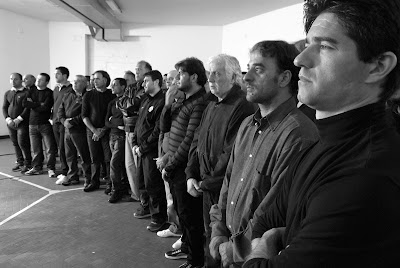 For the most part, this is a documentary, but there are times when you genuinely feel like you are watching this play unfold before your eyes. The difference is, these men are not actors, but unkempt inmates rehearsing in their daily leisure time. They are still very very good and some have clear passion for performance and really work hard to capture the essence of their characters. But what will happen after the curtain call and the final public performance? They will all raise their arms and swords in the air and yell out in pride, and likely have mixed feelings of relief and sorrow. The finale is uplifting and hugely inspiring on one level, and very sad on another.
What is extraordinary about this film is just how cinematic it is. It is beautifully shot, predominantly in black-and-white, though colour is used whenever we are given a glimpse of the world outside the prison and during the performance. Colour is an essential feature of the film, and used to juxtapose between their prison world and the sense of freedom they feel when performing on stage. The use of music is also hauntingly beautiful, with a particularly eerie melody used to separate some of the film's most compelling rehearsal sequences. A lot of the takes are also very long, lingering on the inmates as they exchange dialogue, observing as the scene evolves not just par course with Shakespeare but within this potentially hostile environment.
When the prisoners are rehearsing, sometimes they change the lines of the script and break character, but it is not always obvious they have done so. We are so immersed in this particular period of their lives, and aren't privileged to more than their audition for the role and their rehearsing, so though they are real people with names, we naturally attribute them with their Caesar characters. While it could be argued that more time spent with the inmates prior to their rehearsals would have benefitted ones emotional connection to them - learning what sort of person they are out of character, for example - I felt this emotional connection was very present. We are revealed to their crime/s and their individual personalities shine through in their auditions. The way they dedicate themselves to their roles, and the brief experiences we get of them having broken character - in reaction to a line in the script and how that makes them feel, or when suppressed emotions toward one another resurface - was more than adequate. 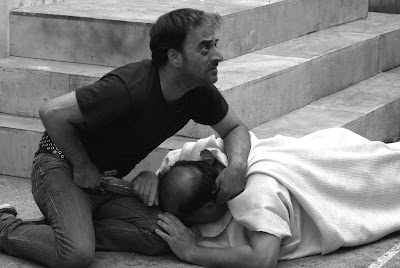 As for the Taviani Brothers, who are now both in their 80's, this is a return to the screen after quite an absence. Winners of the Palme d'Or in 1977 for Padre Padrone, these veterans of Italian cinema have created something pretty special here. I was mesmerised, and I wholly embraced the direction they took to bring Julius Caesar to the screen. Part Shakespearian adaptation, part prison drama, part human philosophical study; this is a wonderful opening to the Official Competition at the Sydney Film Festival.