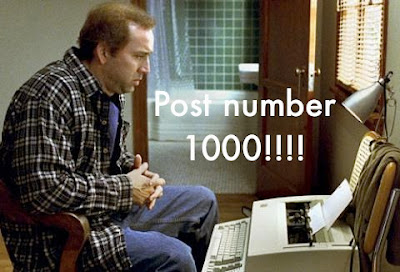 I realised something extraordinary the other day. I was quickly nearing my 1,000th post. Since then I have been trying to squeeze in reviews and articles while still ensuring that I utilised by 1,000th with something personal and related to my love of film - and not just a review, for example. I figured it was as good a time as any to update my Top 100 Films list  - a list of my favourite films that have not only resonated with me personally and prompted me to watch and enjoy them over and over again, but also films I believe to be truly great from an artistic perspective. Films I feel display great skill from everyone involved, and will stand the test of time. Due to Letterboxd's beyond-awesome ease at constructing lists, I have created the list over there and will be updating it on my site shortly.

Thanks to everyone who have continued to stop by The Film Emporium over the last couple of years and become regular readers. I would not have made it this far if it weren't for the inspiration provided by my fellow bloggers, the opportunities that have been offered me and the decades of quality, life-enriching films awaiting my consumption. Here's to another thousand posts...sheesh!!
Posted by Andy Buckle at 7:36 PM