Ted has an Australian release scheduled for July 5.

Ted is the feature film directorial debut from Seth MacFarlane, bringing his politically incorrect sense of humour of Family Guy to the big screen and lending his Peter Griffin-voice-talent to a remarkable feat of visual effect. It is very funny. One of the funnier films to hit cinemas so far this year I'd say.

Ted is about two lifelong friends: a man, John Bennett (Mark Wahlberg) and his teddy bear, Ted (voiced by Seth McFarlane). Young John, an unpopular kid with no neighbourhood friends - even the Jewish kid who gets bashed up on Christmas Eve tells him to clear off - makes a wish that his new teddy bear could come alive, talk to him and be his friend. Sure enough he does and the pair become inseparable. Fast-forwarding twenty years, John and Ted, who has aged just as John has and becomes quite a potty-mouth, are still best buddies and share an apartment together. The have a fear of lightning and a love for Flash Gordon, and both enjoy smoking pot and drinking beer. 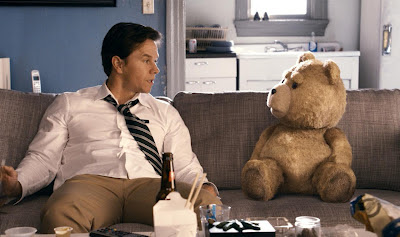 John works at a used-car dealership, a job he hates, and has been dating the beautiful Lori (Mila Kunis) for several years. As the first walking/talking teddy bear, Ted was somewhat of a celebrity back in the day, appearing on Johnny Carson on The Tonight Show, but his fame has faded. Now he has no job and no responsibilites and spends all of his time boozing, throwing parties and being a bad influence, distracting John from his responsibilities - both professional and personal. Lori has been more than tolerant of Ted, but after one too many disappointments, she presents John with an ultimatum; her or Ted. John's life is sent into turmoil, but as it turns out he's not the only one with problems.

If you liked Paul, which is the only other R-rated comedy I can think of that effectively utilised a funny animated creature alongside human actors, and of course MacFarlane's own animated creation, then you should get a lot of laughs out of Ted. Even if you don't, you should still laugh. The visual effects used to create Ted are very well done. There is evidence of the wear-and-tear he has gone through over the years, while his interactions with Wahlberg and the surrounding environment are very realistic. There are also some hilarious moments of randomness, like in Family Guy. Remember the epic fight between Peter and a man dressed as a chicken? There is a fight between John and Ted that is of a similar vein. 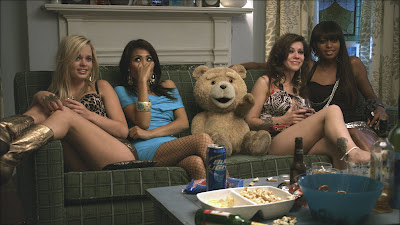 The balance of comedy and heart - and the film succeeds in being moving because of the convincing relationships built between Ted and John, and Ted and Lori even - gives Ted a big lift. The romance between John and Lori doesn't offer much new to the table, but it is warming enough to make us care about them getting back together, and as bizarre as it is, the fact that their future together is being influenced by a talking teddy bear is surprisingly convincing. Ted also turns some genre cliches on their ear, which was funny to see.

There are some excellent cameo appearances, many of which are better left unrevealed. As strong as the three central relationships are and as funny as Seth MacFarlane is, Ted would not be as funny without the free-reign cameos. Joel McHale (Community), as Lori's sleazy boss, Patrick Warburton (David Puddy in Seinfeld), as John's possibly-gay work colleague and Giovanni Ribisi, as an oddball Ted fan all add laughs, while Norah Jones and Tom Skerritt also feature amongst the fun. 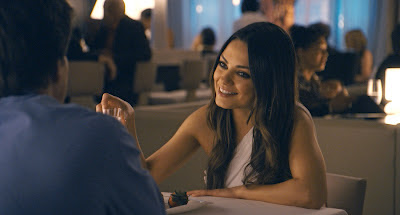 Ted is funny and consistently so. I'm not sure what else there is to say. Not all of the jokes hit the mark - some are excessively vulgar and shift too far into the realm of stupidity, but the target audience will love them - but most of them do and are cleverer than you might expect. True to the Family Guy style there are an abundance of cutaways and witty cultural jabs, and most of the jokes are smartly conceived and delivered. It's an expert voice performance from McFarlane. His debut work as a director is also impressive. Wahlberg pulls off the man-child effectively and there are enough crazy moments to prompt some post-film reminiscence, which is the sign of a decent comedy.