Birthday, the celebrated Australian independent film distributed through Flip It Red Entertainment and Gryphon Entertainment, is now available to rent/buy on DVD. Handsomely directed by James Harkness, making great use of his character-centric, multi-layered and thematically rich screenplay, Birthday was a hit at the 2011 Melbourne Underground Film Festival. Harkness won Best Screenplay, and Kestie Morassi and Richard Wilson picking up supporting actor/actress awards. At the 2010 Cannes Independent Film Festival, Natalie Eleftheriadis won the award for Best Actress and the film screened In Competition. It is an accomplished achievement, a film that effectively juxtaposes the prostitution trade (an interaction usually void of any human emotion) with a rewarding sensitivity - humanity’s natural desire to feel love and connection - and one very worthy of attention. 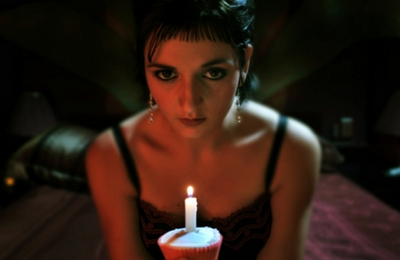 Birthday is set over the course of one day and from the beginning sets up two intriguing parallel stories. We are first introduced to M (Natalie Eleftheriadis, who starred as M in the theatrical play version of Birthday), the highest paid and most respected of the girls who work at the house of the no-nonsense Scarlet (Chantal Contouri, Thirst). She is quietly and personally celebrating her 25th birthday, but as her trade is sex, its business as usual. Today’s business is hardly the usual though because the house is plagued with incidents and she spends most of the day offering advice to her less-experienced colleagues, Lily (Krestie Morassi, Wolf Creek) and Cindy (Ra Chapman) and troubled clients, Father Phillip (Travis McMahon, I Love You Too) and Joey (Richard Wilson, The Loved Ones), alike.
The second story tracks Joey, an incredibly shy and nervous young man whose traumatic life is recounted during a lengthy interrogation at a Centrelink office about his Government benefits. He has lost his purpose in the world, and doesn't understand what it means to love. He has never shared a kiss with anyone and is scared he will never be able to meet the right person. Joey's path leads him to Father Phillip, a sad and lonely man who has lost his faith, and ultimately M. Joey and M share a birthday, and when they meet they realize they can offer each other something. For Joey, intimacy with a female and the feeling of genuine connection to another person for the first time, and for M, a simple kind deed and meaningful time spent with a person not simply looking to use her for sex.

The film's climax, a powerful sequence between Joey and M, is one of the highlights, but a lengthy conversation between M and Father Phillip is just as brilliantly conceived. What begins as a discussion of God’s existence and losing ones faith becomes about comparing Jesus’ chastity (he was constantly surrounded by disciples and followers) to the vows taken by a Priest and what is given up – intimacy, companionship, love. Phillip’s story about a lover he had in the past is tremendously moving, and the performances of McMahon and Eleftheriadis are sensational here. Eleftheriadis is especially excellent throughout, in fact, but I was also impressed by Wilson's often-devastatingly nervous portrayal.
A lot of sequences are comprised of lengthy conversations between two characters (often M and Lily), and the film's origins as a stage play are evident. The dialogue, though obscenity-heavy, is compelling and it is just refreshing to see an insider into the sex trade without actually seeing much sex and making a big deal about the horrific oppression faced by the female workers, but actually a study of regular people trying make sense of their lives.


The supporting cast is strong, with Lily and Cindy also having significant story arcs. Lily is kind and full of energy, but desperately trying to make ends meet, prove to Scarlet she has what it takes, and overcome her own low self-esteem. Throughout the day, she has several altercations with Scarlet about clients and money, and visits M to calm herself down, requesting to listen to M’s poetry. The severely troubled and drug-riddled Cindy is fired by Scarlet after some bad business, despite having her young child with her and nowhere to go.

The design of the house - almost the entire film takes place in M's room and the adjoining halls and rooms - is very impressive and the lush cinematography and exceptional red-hued lighting also adds to the atmosphere. On as stylistic level it is also impressive save for a few blunders - the fade in/out of the characters on two occasions doesn't make sense and the flashbacks to M's childhood and school days are not all that convincing. The performance given by M's principal in a flashback was appalling.


Australian filmmakers seem to be very interested in the sex trade of late. Birthday his puts Julia’s Leigh’s film, Sleeping Beauty, an alienating and pointlessly puzzling study of a young woman willing to put her body through anything for money, to shame. There are lots of subtle things happening in this well-crafted film that are powerful purely by being alluded to. While we get an adequate insider view into the life a sex worker, it is the characters and their surprisingly philosophical discussions that enrich the story the most, raising ideas about love and intimacy, celibacy and companionship, ones desire for appreciation and even poetry. Certainly worth your time.