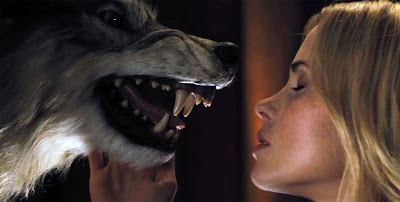 Despite the Sydney Film Festival madness, there are still some new releases hitting cinemas. Thankfully, I have already seen one of the films out this week and have one booked in during SFF. There is one I have no desire to see and can't access another because it isn't playing in my city. Out this week is the long-awaited and hotly anticipated horror spoof, The Cabin In the Woods, which, after a poor showing in American cinemas, was going to go straight-to-DVD before Roadshow decided to release it in only a few cinemas across the country. In Sydney, it is only playing at the Chauvel Cinema. Also out this week are Rock of Ages, That's My Boy, Take This Waltz, Le Chef and in Melbourne only, Margaret.

Cabin in the Woods - Five friends go to a remote cabin in the woods. Bad things happen. Though it didn't make much money in the U.S, it received strong reviews and I believe it turns this tried and tired story and the horror genre inside out, offering laughs and scares aplenty while remaining sharp and smart. From fan favorites Joss Whedon (The Avengers) and Drew Goddard and stars Chris Hemsworth.

That's My Boy - While still in his teens, Donny (Adam Sandler) fathered a son, Todd (Andy Samberg), and raised him as a single parent up until Todd's 18th birthday. Now, after not seeing each other for years, Todd's world comes crashing down on the eve of his wedding when an uninvited Donny suddenly shows up. Trying desperately to reconnect with his son, Donny is now forced to deal with the repercussions of his bad parenting skills. I don't know anyone - considering Sandler's duo of bombs last year - that has any intention of seeing this film.

Take This Waltz - When Margot (Michelle Williams), 28, meets Daniel (Luke Kirby), their chemistry is intense and immediate. But Margot suppresses her sudden attraction; she is happily married to Lou (Seth Rogen), a cookbook writer. When Margot learns that Daniel lives across the street from them, the certainty about her domestic life shatters. She and Daniel steal moments throughout the steaming Toronto summer, their eroticism heightened by their restraint. Swelteringly hot, bright and colorful like a bowl of fruit, Take This Waltz leads us, laughing, through the familiar, but uncharted question of what long-term relationships do to love, sex, and our images of ourselves. Directed by Sarah Polley.

Margaret - Centers on a 17-year-old New York City high-school student who feels certain that she inadvertently played a role in a traffic accident that has claimed a woman's life. In her attempts to set things right she meets with opposition at every step. Torn apart with frustration, she begins emotionally brutalizing her family, her friends, her teachers, and most of all, herself. She has been confronted quite unexpectedly with a basic truth: that her youthful ideals are on a collision course against the realities and compromises of the adult world.

Weekly Recommendation: Make the effort to see Cabin in the Woods and Take This Waltz. My recommendation for Cabin is blind, but I am confident it will please genre fans and pretty much anyone desiring a laugh. Take This Waltz features another stellar performance from Michelle Williams and is original, which is nice to see. If you're a Melbourne resident, I have it on good authority that Margaret is one of the best films to hit screens this year. Let me know if that's the case.
Posted by Andy Buckle at 12:53 PM