I was visiting my family yesterday and my mother and I decided to watch a film together. As a big Clint Eastwood fan she has a six film Eastwood Collector's Set including some of his earliest works as a director. We went with Play Misty For Me but Coogan's Bluff, Joe Kid, High Plains Drifter and The Eiger Sanction were some of the options.

Play Misty For Me, the directorial debut of Clint Eastwood, is a decent psychological thriller that showed glimpses of Eastwood's skill behind the camera. It caused a stir when it was released, chronicling some sordid business and a torrid affair between Eastwood’s character Dave Garver, a KRML radio disk jockey, and an obsessed fan, which takes a dangerous turn when he continues to reject her. Though imperfect - there are some pacing issues and a stagnant block that doesn't develop the narrative at all, and some corny dialogue - there are several creepy moments and scenes of palpitating suspense. Eastwood is always watchable and Dave finds himself helpless and in a very unpleasant situation. 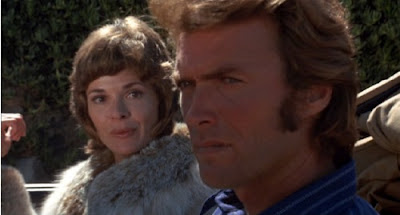 Dave, who broadcasts nightly from his studio in Carmel, California, meets a woman named Evelyn Draper (Jessica Walter, Arrested Development) at a bar he frequents. She shows interest in Dave and declares to be a fan of his show. After he drives her home, she reveals their meeting was not a coincidental one but one orchestrated by her after hearing about his favourite bar on his show. He realizes that Evelyn is a regular caller, a woman who requests he play the song ‘Misty’.

Dave, a womanizer not wishing to complicate his life while he waits for an ex-girlfriend to return to town, is coerced into spending the night with Evelyn. The following day, with Dave feeling a little uncomfortable but sure there were no strings attached, is surprised by Evelyn’s visit to his studio with his lunch. It is just the beginning. Evelyn will not let up, attempting to ruin Dave's life, and threatening his girlfriend, Tobie (Donna Mills), when he doesn't reciprocate her affections.

Who doesn’t enjoy watching Eastwood getting angry, and the scenes shared by Eastwood and an excellent Julie Walter are easily the most compelling in the film and are actually really uncomfortable to watch. When they aren’t together the story is far less interesting, though Dave's colleague Al Monte, played by James McEachin, provides plenty of humour to his scenes and John Larch's Sgt. McCallum is also an amusing supporting character. 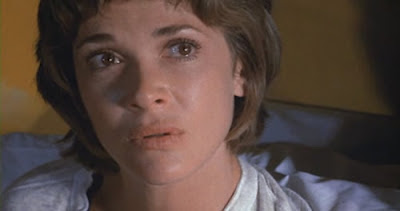 To accentuate that Evelyn is destroying both his personal and professional life, Dave tries to make a deal with an out-of-town agent who enjoys Dave’s show and requests a recorded tape to help considerations. Their meeting, which is going well, is ruined when Evelyn turns up in a jealous rage claiming he is cheating on her. Dave, from the beginning, is resistant, and it is both aggravating and entertaining to watch him be manipulated by Evelyn's blind obsession, unrelenting persistence and unhinged grasp on the reality.
The plot meanders to a distracting extent at times. This is especially evident during a ten-minute block in the second half (an overlong erotic forest romp followed a seemingly pointless visit to a Jazz festival), which didn’t need to be there at all. This might result in a viewer completely losing interest, and is an all too evident calm before the predictably intense finale.
Eastwood also appears to be in love with the locations surrounding his home city, with a lengthy opening credit sequence capturing Eastwood’s character simply driving and an array of aerial shots. On several occasions, Dave and Tobie wander through the forests surrounding his house and studio, and there seems to be deliberate attempts to push this story to a feature-length runtime. 102 minutes is far too long, though. 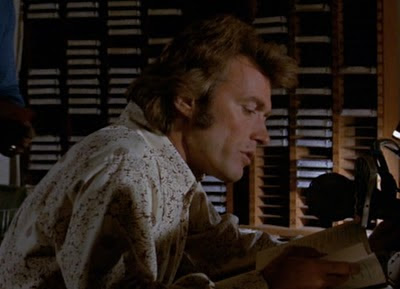 There isn’t a lot new here, but given it is over 40 years old I guess it had some influence on films like Fatal Attraction. Eastwood effectively utilises the brand of suspense-driven cinema with quite a dose of bloody violence and creepy captures of Evelyn spying on Dave during the day, and crafts an intriguing tale. On a technical level there isn't much more to say, but Dave's house is especially interesting, and an intimidating feature all on its own. It is made up of one large room, with the front courtyard and his bedroom connected. A lot of scenes take place at night and in poorly illuminated locations, further adding to the tension.

Play Misty For Me is not a great film, but it is an easily digestible genre flick and one that offers up enough thrills and surprises to remain compelling enough. It allows Eastwood to experiment with his craft and give us something different as a performer; a smooth-talking DJ and charmer who finds himself suffocated and any semblance of his masculinity destroyed by a psychopath, and a frighteningly unpredictable one at that.